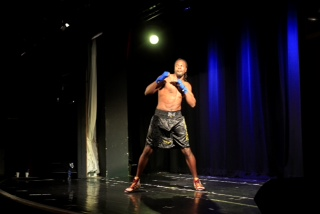 Audley Harrison will break his silence ahead of the sold out Betfair Prizefighter Heavyweights III on Sky Sports’ boxing magazine show Ringside tonight from 6pm on Sky Sports 1HD.

A-Force has turned his back on media interview requests in the build-up to his second crack at Prizefighter and enforced a Twitter blackout throughout his training camp, but tonight he will appear alongside fellow former champ Martin Rogan as the draw is revealed live on the show.

Rogan won the first ever Prizefighter tournament in April 2008 at the east London home of boxing, while Harrison’s triumph came the following year at the ExCeL Arena in October. Lifting the trophy catapulted both men onto major title shots, and Harrison believes victory on Saturday night could once again set him on the road to more big nights.

“Prizefighter was a great springboard to get me back in contention,” said Harrison. “I had lost to Martin Rogan and coming back I remember seeing Eddie Hearn in Vegas and he said he was thinking of doing Prizefighter and with Michael Sprott and Danny Williams and the names that he mentioned I thought it was a great opportunity to get back. Obviously I went from Prizefighter to the European title to the World title, and that was the domestic Prizefighter. This being the International version it has six other guys who have been on the world level or European level.

“Opportunities were going to be low after the David Price fight, I think most people thought they would never see me in a boxing ring again, but I was more frustrated than anything else, getting knocked out in a round. I was in great shape, back in love with boxing again so after that I had to really suck it up and think, am I really going to be able to reach the end of the line and achieve my goals?

“I looked and it and thought, hell yeah it ain’t over yet and so once Eddie gave me this opportunity with Prizefighter I was able to stay focused, I went straight back to the gym even though I had a broken nose. It didn’t allow me to skip a beat. Going through that adversity, like I have done many times in my career and my life, just sets you apart. The fire is still burning and the reason I have come back is because it is a great opportunity and the fire is still burning, more than ever actually. I have paid the price in training and I will turn up on Saturday night, cool, calm and collected, which I haven’t been for a little while.

“Against David Price I was trying to force it, which isn’t me. Now I am back to cool, calm and collected and Saturday I will turn up, do what I was born to do and put in three performances: one is not going to be good enough.”

Betfair currently make Walker the favourite to win the 29th edition of Prizefighter at 5-2, Lewison the second favourite at 7-2, Rogan a 4-1 shout ahead of Sosnowski at 5-1. Harrison is 11-2 for his second Prizefighter win with Rossy (25-1), Hoffman and Bertino (both 33-1) the outsiders in the pack. Click here for the latest odds: To win Betfair Prizefighter International Heavyweights III