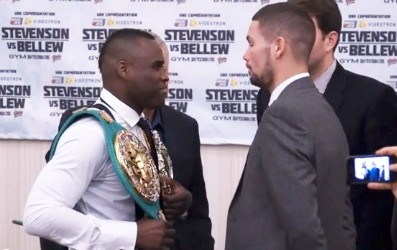 HBO’s hit late-night boxing franchise travels to Canada for an all-action Thanksgiving weekend doubleheader of light heavyweight powerhouses when HBO BOXING AFTER DARK: ADONIS STEVENSON VS. TONY BELLEW AND SERGEY KOVALEV VS. ISMAYL SILLAKH is seen SATURDAY, NOV. 30 at 10:15 p.m. (live ET/tape-delayed PT) from the Colisee Pepsi in Quebec City, exclusively on HBO. The HBO Sports team will be ringside for the event, which will be available in HDTV, closed-captioned for the hearing-impaired and presented in Spanish on HBO Latino.

In the 12-round main event, light heavyweight champion Adonis Stevenson (22-1, 19 KOs) of Quebec defends his title on his home turf against the UK’s Tony Bellew (20-1, 12 KOs). Stevenson, 36, dismantled former champion Chad Dawson with a first-round knockout in June to win his first world championship, and successfully defended his title in September, stopping another champion, Tavoris Cloud, at the end of the seventh round. Making his third appearance on HBO in five months, he hopes to continue his meteoric rise in the 175-pound division.

In his HBO debut, Bellew will look to use his significant height and reach advantages to halt Stevenson. Taking place on his 31st birthday, the bout marks Ballew’s first fight outside the UK and his first shot at a world championship.

The opening bout pits Russia’s Sergey Kovalev (22-0-1, 20 KOs) against Ukraine’s Ismayl Sillakh (21-1, 17 KOs) in a scheduled 12-round light heavyweight title fight. Making his second HBO appearance this year, the undefeated Kovalev, 30, is coming off the biggest win of his career, a masterful fourth-round technical knockout of Nathan Cleverly that brought him his 175-pound title.

Sillakh, 28, has an extensive amateur resume and near-perfect professional record. A resident of Simi Valley, Cal., he will be fighting in his sixth country as a pro and making his HBO debut.