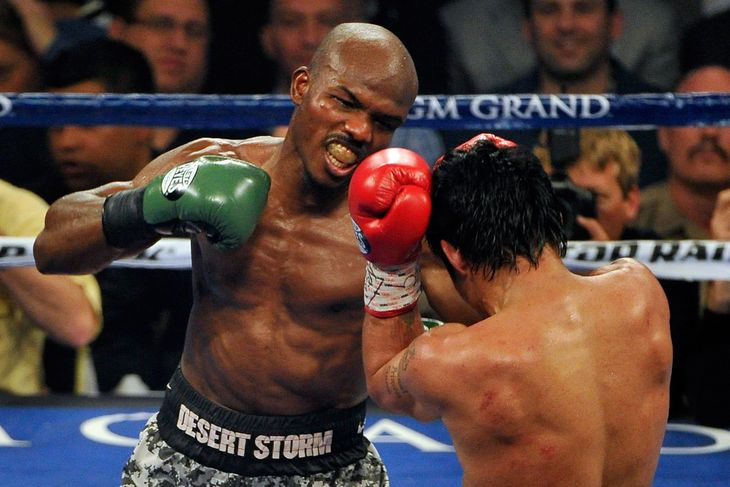 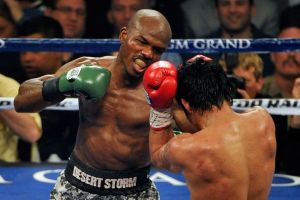 The Cosmopolitan in Las Vegas, Nevada will be the site at which Timothy Bradley(31-1, 12 KOs) hopes to erase the stain of his first official career defeat. Almost eight months to the day after losing his WBO welterweight title to Manny Pacquiao in the rematch of a highly debated scrap that took place in 2012. Bradley hopes to use the Argentine, Diego Chaves (23-2, 19 KO’s) as a springboard back to the very highest level.

Taking questions on the eve of his match with Chaves, Bradley was asked to rate the power of the two opponents who have given him the most notable fights of his career, Pacquiao and Ruslan Provodnikov.

“[Pacquiao is] probably like an eight. I think the biggest puncher I’ve been in there with is Ruslan Provodnikov. He’s like a ten. Ruslan Provodnikov can punch man. Pacquiao, he can punch. He just has those blows that keep you still, you know what I mean? [It’s] like boom,” adding in his best impersonation of a bobble-head doll, “And for a minute you like ooooo. You know what I’m saying? Then the follow up punches are the ones that hit you.”

He then turned the spotlight to face himself to assess his own power. His knockout percentage does not scream out murderous puncher at under forty percent, but he has had sufficient pop to keep some real maulers at bay, which is enough if you have the skills to work within those perimeters. Everyone should agree that Bradley falls in to that category.

“I think my power has shown up in the last couple of fights I’ve had. I was able to rock Marquez with a left hook and I was able to hurt Manny Pacquiao with a right hand and some body shots as well. He was hurt several times in that fight. I think I’m developing better as a fighter.”

He then offered some frank insight as to why he may have been unable to stop a larger proportion of past opponents, and it didn’t sound as if he was making any excuses either.

You will not hear many top fighters break down the flaws in their own game with such apparent nonchalance. I’m not sure whether that speaks for an extraordinary will of self-belief he has within himself or that he just doesn’t care who hears it. Either way his next assignment is far beneath the realm in which he has been existing for the past five years. Chaves is a sturdy fighter who manages to intersperse illegal tactics between sporadic bursts of quality punching. Most fans will only know him from his stoppage loss to Keith Thurman and getting disqualified against Brandon Rios. He is levels below Bradley and the result on the night should reflect that, especially if Bradley unearths more of that dormant power in his fists.