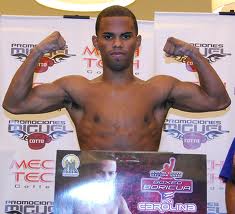 Santos vs. Wilson is presented by Golden Boy Promotions and Sunrise Sports & Entertainment and sponsored by Corona. Doors open at 7:30 p.m. and the first bell rings at 8 p.m.  The FOX Sports Networks and FOX Deportes bi-lingual simulcast will air live at 10 p.m. ET/7 p.m. PT.  FUEL TV will rebroadcast the fight on Sunday, June 30 at 12 p.m. ET/9 a.m. PT.

In addition to the June 1 event, the BB&T Center and Golden Boy Promotions will host additional live boxing events on Oct. 12, 2013 and Jan. 14, 2014.  Fight fans can purchase annual subscriptions for the three remaining events inclusive of VIP seating and boxing legend meet and greets by calling 954-835-CLUB.

23-year-old featherweight sensation Braulio Santos (10-0, 9 KO’s) has drawn comparisons to several Puerto Rican greats from the past thanks to his fast and heavy hands that have seen him knockout nine of his 10 professional opponents with six falling in the first round.  Fresh off of a 57 second knockout over 7-1 Kevin Hoskins in March, Santos will look for another quick finish in his third bout of 2013 on June 1.

A gutsy competitor who always shows up to fight, Fort Myers, Florida’s Derrick Wilson (9-4-2, 3 KO’s) hopes to snap a two-bout losing streak when he takes on Santos in his home state this June.  Best remembered for his first round knockout over then unbeaten Charles Huerta in 2009, the 24-year-old will look to recapture that form and expects to be at his best with home state fans in his corner against the highly-regarded Santos.

A 2009 Junior Olympic national champion, 20-year-old Daquan Arnett (10-0, 6 KO’s) of Winter Park, Fla. has been equally dazzling as a professional with his speed and power leaving opponents searching for answers that never arrive.  In his last two fights, Arnett has tarnished the unbeaten records of Jeremiah Wiggins (TKO 4) and Brandon Quarles (W 8) and he plans on defeating the veteran Garcia on June 1.

Hailing from Vega Baja, Puerto Rico, Irving Garcia (17-8-3, 8 KO’s) is a battle-tested warrior who has traded leather with Ishe Smith, Mike Jones, Luis Abregu and Said Ouali over the course of his nearly 15-year career.  Geared up to show rising star Arnett a thing or two this June, the 34-year-old can inject new life into his career with a win over the highly-touted prospect.