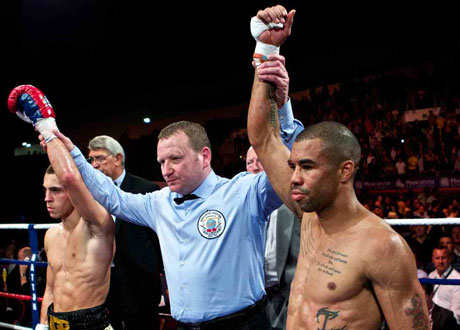 A potentially great card in British boxing ended quite disappointingly on Saturday night. The line-up of bouts proved to be interesting but in the ring it did not meet expectations in my opinion; the biggest disappointment was the headline bout which suddenly ended in an anti-climactic fashion.

Crag Watson (21-5), the British Welterweight champion, got an expected straight forward victory by winning all six rounds against the Polish novice Tomasz Mazurkiewicz (5-8-2) in a completely out-matched affair. He can get on with his career now with his two consecutive losses are a thing of the past.

Martin Murray (24-0-1) remains undefeated with a ten-round point’s victory over the French Middleweight champ Karim Achour (13-3-2). Although the Frenchman did take a couple of rounds and in parts Murray did not look impressive, he got through the bout with a victory and is back on track for another world title shot in the near future.

The Belurussian Sergey Rabchenko (22-0) won the Light-Middleweight title against British veteran Ryan Rhodes (46-6) in a 7th round stoppage. Despite the good start for Rhodes, once the fight settled Rabchenko found his rhythm and began to hit his target. He began to demonstrate superior ability throughout the middle rounds until the 7th where he landed a brilliant body shot which completely took the air out of Rhodes. Regardless of what commentators predicted beforehand Rhodes promised to continue his career and come back from this loss.

The main event was a massive disappointment, especially when considering the lengthy build-up for the vacant interim WBA Super-Bantamweight title clash between Scott Quigg (24-0-1) and Rendall Munroe (24-2-1). We all expected a great bout which could go either way, but instead it was a premature stoppage which happened in the 3rd round due to an accidental head-butt which caused a nasty cut on Munroe. I had the fight 1-1 at this point and I’m not completely sure who would’ve won had the unforeseen incident not happened, although if I had been pressed I would have predicted a Quigg victory. No doubt the two will meet again in a rematch on the soonest, most practicable date in order to settle the score.