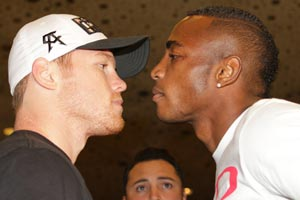 Boxing fans were on hand to support the fighters before they lay it all on the line this Saturday, July 12.

Here is what the fighters had to say:

“Erislandy Lara insulted me and my country. He insulted my ability to box, and I take that seriously. This is more than just a fight for me. On Saturday, I’m not only fighting for my honor, I’m fighting for the pride of my country.

“We’re ready to fight and I’m so happy to see all these people anxious for the day to finally arrive.

“The fans are my motivation to keep winning and competing at a high level.

“There’s a lot more of my story to be written so I am completely focused on Saturday night.

“Lara can get motivated however he wants, talking or not. The best man will win on Saturday.

“When I arrived to the United States from Cuba, times were tough.  I’ve built what I have from nothing. I take pride in the opportunities that this country has given me. And I’m not about to let this one go by.

“On Saturday I will trudge through the doors that my boxing skills have opened up for me and the world will know who I am.

“I feel very special to be here right now. I don’t feel any pressure because I am ready to fight.

“They can say what they want Canelo is Canelo. I’m ready to fight because I believe the best should fight the best.

“Right now Canelo is my enemy and this is war now.

“I’m fighting for my family, to put food on the table for them. No one can take that away from me.”

“This fight is no walk in the park. Jonathan is a warrior and that’s why I trained very hard. I’m here to make a statement.

“The Mexico vs. Puerto Rico rivalry lets you know this is going to be a great fight.

“I’m glad he has the mentality of the knockout, but on Saturday it is going to be my night in the ring.”

“I’m not going to lie; I have a lot of respect for Abner Mares, but don’t let that fool you. I don’t feel any pressure, he’s a great champ but there will be blood in the ring on Saturday, and it won’t be mine.

“We have great fighters from Puerto Rico and this is for those fans who will see something great Saturday.

“The knockouts come naturally to me; if it presents itself I will definitely knock him out.”

“Everything I did in the gym takes the pressure away and makes my confidence rise.

“We’ve got two great countries, Puerto Rico and Mexico battling it out and I just want to prove Puerto Ricans can fight.”

“I don’t feel any pressure, that stuff just motivates me.

“I’m glad to have all my countrymen here and we will give them all a war.”

“I know what I have in front of me. Mauricio is a tough, aggressive fighter and we’re going to give a great fight.

“Make sure you don’t miss my fight Saturday. I’m going to be his problem, not Danny Garcia.”

“I’m coming off of a controversial loss, and I’m not about to let that happen again. I’m going to come out victorious on Saturday night and no judge will think otherwise.

“We’re going to go through Johan first before worrying about another chance at Danny Garcia.

“Johan is the guy in front me and I’ll show all of you a great match on Saturday.”

“Fights like these are all for the fans, that’s why we’re in this business. The match-up between Canelo Alvarez and Erislandy Lara is going to be explosive and everyone in attendance and watching on television will witness the heart and will of two true champions.

“When the final bell sounds on Saturday night, there will not only be a winner in the ring but the fight fans will walk away the winners as well because they will have seen boxing at it’s best.

“Make sure you get there early for fireworks in the ring.

“Top to bottom, this card is going to be explosive.”

“Honor & Glory: Canelo vs. Lara,“ a 12-round junior middleweight fight taking place Saturday, July 12 at the MGM Grand Garden Arena in Las Vegas, is promoted by Golden Boy Promotions and Canelo Promotions and sponsored by Corona and AT&T. In the co-main event, Abner Mares returns to the ring to face Puerto Rico’s Jonathan Oquendo in a 10-round featherweight bout. In the SHOWTIME PPV opening bout, Johan Perez defends his interim WBA Junior Welterweight World Title against Mauricio Herrera in a 12-round matchup. Also, Juan Manuel Lopez meets Francisco Vargas in a 10-round bout for the WBO International Super Featherweight Title. The event will be produced and distributed live by SHOWTIME PPV beginning at 9 p.m. ET/6 p.m. PT. The event can be heard in Spanish using secondary audio programming (SAP). For information visit www.SHO.com/Sports. Canelo vs. Lara will be shown on the big screen in movie theaters across the country via Fathom Events. Information will be available at www.fathomevents.com.