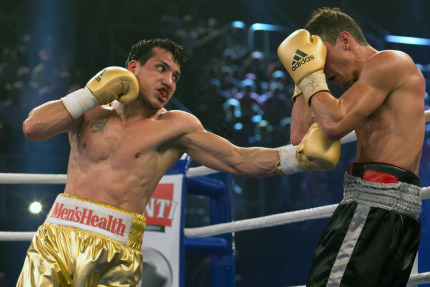 Having already achieved world champion status as an amateur – now, Jack Culcay (17-1, 10 KOs) has sets his sights on his first major championship in the pro ranks. Following a number of successful defences of the WBA Intercontinental Belt, ‘’Golden Jack’’ will challenge for the European Light Middleweight Title on August 16. Culcay will attempt to dethrone the unbeaten Issac Real (10-0, 5 KOs) at the Erfurt Exhibition Hall in Thuringia, Germany.
“This is the chance I have been working towards for some time,” said Culcay, as he makes clear that this is only part of a long-intended plan of his. “I said last year that I will become European Champion in 2014 and then go on to fight for a world title in 2015. My career is like a puzzle and all pieces are going to come together.”
However, Real wants to smash Culcay’s puzzle. The reigning European Titlist claimed his championship with a technical knockout win against Italian Emanuele De La Rosa in May. “I came to his backyard on short notice. The cards were stacked against me but I provided a REAL shocker,” The 32-year-old remembers. “It will be no different for my first title defence. I am going to bring Culcay down to earth with a bang, knocking him out!”
Culcay, despite his plans, does not underestimate the European Champion. “Currently, I am fully focused on meeting Real inside the ring, I have already started studying his strengths and weaknesses by watching videos of his fights.” “Golden Jack” also believes an early ending may come on August 16. “This will be a thrilling encounter, which I will close in fashion.”
The main event at the Erfurt Exhibition Hall in Thuringia, Germany will see Yoan Pablo “Iron Man” Hernandez defending the IBF Cruiserweight World Championship against former titlist Firat Arslan. Tickets are available via www.eventim.de.
Tweet