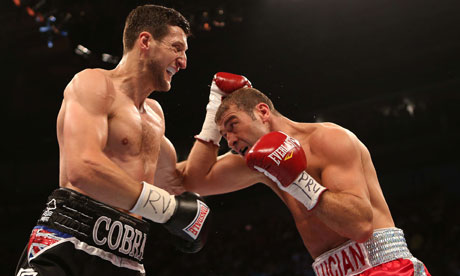 Carl Froch is targeting a trip to Montreal later this year for a rematch with Lucian Bute, once he has ‘avenged his loss’ over Mikkel Kessler.

The three-time World champion won the IBF belt from Bute last May and it has been reported that the 32 year old Romanian-Canadian could be in line for a shot at the WBC title on the same night as Froch vs. Kessler II.

The announcement of that fight led some to speculate that a Bute rematch was no longer on the cards, but the Nottingham super middleweight still intends to travel to Canada before targeting a blockbuster UK bout against Andre Ward.

“People always ask me how many fights do I have left but right now it’s all about focusing on Mikkel Kessler,” said Froch.

“I know what an intense war that will be but after I’ve avenged my loss I want to return to Montreal and take care of Bute again. It looks like he is in line for the WBC title so a fight for all the belts would be a huge occasion over there.

“The final piece in the jigsaw is Ward. He beat me fair and square first time round but I promise it would be one hell of a different fight here in the UK.”

Froch’s promoter Eddie Hearn is confident a rematch with Bute will happen and hasn’t ruled out the possibility of the 32 year old fighting for the WBC belt on the same card as Froch vs. Kessler II.

“We have been in constant communication with Interbox since the first Froch vs. Bute fight, which was a big commercial success,” said Hearn.

“Lucian looks set to fight for the WBC title next and we would all like to make that happen on the same night as Froch v Kessler II, in Canada, Romania or even in the UK on the same card.”

A date and venue for Froch vs. Kessler II will be announced shortly.