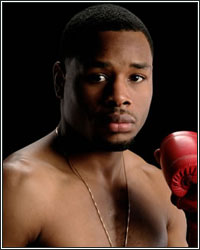 But heading into the biggest fight of his life tonight, Fort knows it is now time to earn the respect of the boxing world by being anything but polite against Virgin Islands slugger John “Dah Rock” Jackson (15-1, 14 KOs).

The two will meet tonight (Friday, April 19) at the Tropicana Showroom in the Tropicana Casino & Resort in Atlantic City and live across the country on ESPN Friday Night Fights (10:30 p.m. ET on ESPN2 HD, ESPN Deportes and WatchESPN and later televised Saturday April 20, at 2:30 a.m. on ESPNEWS).

“I give a lot of respect, I was raised well by my grandmother, but I know it’s time for me to go out and get my respect now. That’s what this performance against Jackson will be about. It’ll be my introduction to the boxing world.”

“I’ve got power too. He’s going to feel it. I call myself a puncher/boxer. He’s either going to have to throw in the towel or get knocked out because I’m here to show the world what I can do. I didn’t have a famous father in boxing. I have a lot of will built in me. I used to run six miles a day to get to the gym. I made me who I am. I didn’t have any help from anyone famous.”

“The dream is to be world champion someday. That’s why I’m in it. And after this fight, all the fans will know who I am. People inside boxing have known who I am for years because of my amateur career, but now the fans around the world are going to see what I can do!”