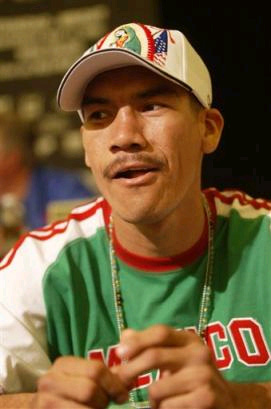 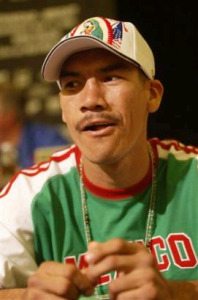 PHOENIX  — September 15, 2014 —  Tijuana’s Cosme “Chino” Rivera (37-18-3) will face Konstantin Ponomarev (24-0, 12KO) in Saturday’s main event bout at Phoenix’s Celebrity Theatre.  Andy Ruiz, who was originally slated to be in the main event spot, was forced to withdraw from the contest due to family reasons. The bout will be televised on Unimas’ Solo Boxeo Tecate.
Rivera, who hails from Tijuana, Mexico, promises to be Ponomarev’s toughest opponent to date.  In his last outing in May, Rivera knocked out Ty Barnett in the 9th round of a 10-round contest.   Barnett was the hometown favorite in the Washington DC bout, and Rivera was subsequently attacked by a local fan.
Russia’s Ponomarev is trained by Jesse Reid Sr., who has described him as a “Young Canizales,” and has said Ponomarev yields tremendous speed, dedication and heart.  The ten round contest will take place at 140 lbs.
The card also includes Trevor McCumby (16-0, 12KO) in a 6 round bout, as well as Shane Mosley, Jr. (2-0, 2KO).  Robert Garcia trained Oleksandr Gvozdyk (2-0, 1KO) and two-time Olympian Egidijus Kavaliauskas (7-0, 6KO) are also in action on September 20th.
The fight card is rounded out by local fighters.   Francisco De Vaca, who is trained by Roberto Alcazar, is making his seventh straight appearance on an Iron Boy fight card. Recent Iron Boy Promotions signee Victor Castro (11-0, 5KO), who conducted training camp in California with Israel Vasquez, will return to fight in front of his loyal Phoenix fan base.  The talented Carlos “The Chosen One” Castro (5-0, 2KO) will make his ring return under the tutelage of trainer Jose Benavidez, Sr. Edgar Brito, Alexis Santiago, Alexis Zazueta and Daniel Garcia will also be in action on fight night.
Iron Boy Promotions will hold an open media workout at Iron Boy Gym (4238 S. 37th Street in Phoenix) on Tuesday, September 16th at 2 p.m.  Food will be available for members of the media.  The official weigh-in will be held at Crescent Crown in Mesa, Arizona on Friday, September 19th at 2p.m. and is open to the public.
Tweet