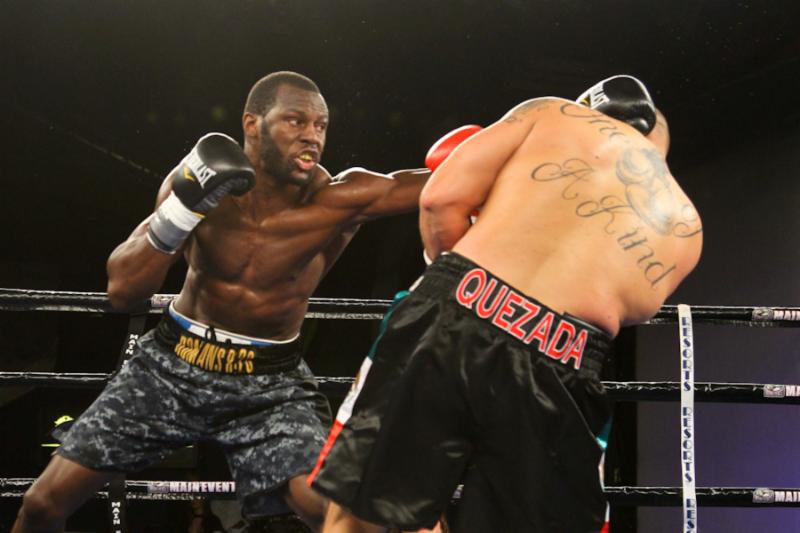 Philadelphia, PA:   Former two-time world champion Steve “USS” Cunningham (26-6-0, 12 KOs) is no stranger to NBCSN Fight Night. The 37 year old heavyweight has appeared in two of the series’ marquee afternoon editions ofFight Night on the NBC broadcast network.  On Friday, April 4th Cunningham will return to Fight Night in his hometown of Philadelphia, PA to challenge undefeated heavy-hitter Amir “Hardcore” Mansour (20-0-0, 15 KOs), making his second appearance on the series, for Mansour’s USBA Heavyweight Title in a ten round battle at the Liacouras Center on the campus of Temple University.  The fight is the main event on NBCSN Fight Night beginning at 10 pm ET/7 pm PT.

Mansour, a southpaw from nearby Wilmington, DE, has been banging away on the fringes of the Top Ten in recent years.  He captured the vacant USBA title last summer, scoring a unanimous 12-round decision over Maurice Harris, of East Orange, NJ, at the Dover Downs Casino in Dover, DE. In his last fight on the December 14th edition of Fight Night, Mansour knocked out Kelvin Price, of Pensacola, FL, in seven rounds at Resorts in Atlantic City, NJ. “I’m looking forward to this fight more than any other fight in the past,” said Mansour, who recently signed a managerial contract with pay-per-view mogul Joe Hand.  “I’m gonna train for Steve as if my life depends on the win.  I greatly respect Steve, but on April 4th I’m gonna speak to the boxing world, using my hands.  I will not be denied.”

Hardcore did not compete professionally for over nine years while he served time in Schuylkill Federal Correctional Institution in Minersville, PA for drug possession.  Coincidentally, the Liacouras Center is only about one hour away from the prison where he spent the majority of his thirties. He will be looking to prove that he is not too late to the heavyweight party and that he can compete at the highest level.  At 6’1″ and with an expected 20 pound weight advantage, Mansour will not be intimidated by Cunningham’s 6’3″ stature.  But with a lighter weight comes quickness and boxing fans are wondering how Mansour will be able to handle Cunningham’s speed and agility.

Cunningham is coming off an important victory on December 14th against Manuel Quezada in an eight round unanimous decision at Resorts International Casino and Hotel. The win snapped a two fight losing streak that began with his controversial points loss to Tomasz Adamek on NBC on December 22, 2012 and continued with a seventh round TKO loss to Tyson Fury on NBC on April 20, 2013.  USS plans to keep his momentum going against the powerful Mansour.  A focused Cunningham said, “I’m not going to talk this to death. I’m very focused and taking this seriously.”  He added, “This time I’m fighting in my backyard and I want to give my fans a spectacular performance. It’s time to fight.”

Main Events’ President & CEO Kathy Duva said, “I’m really looking forward to this fight. It has everything we want on this series -heavyweights in an evenly matched crossroads bout at a great venue in a location that really adds something to the match. You can’t ask for more!”

Co-promoter, J Russell Peltz said, “This is not an appearance fight.  Instead, this is one of the most intriguing heavyweight fights in recent years. I’m talking about Adamek-Arreola and a slew of heavyweight fights on NBC such as Jennings-Liakhovich, Adamek-Cunningham and the upcoming Adamek-Glazkov match.  This one fits right in. Cunningham has to win this fight to remain viable in the heavyweight division.  Mansour needs to win to prove to people that despite beating the second tier of heavyweights en route to his 20-0 record he is capable of taking the next step.”

The event features a ten-round bout for the USBA Heavyweight Title between Steve “USS” Cunningham and USBA champion Amir “Hardcore” Mansour live on NBCSN Fight Night from the Liacouras Center in Philadelphia, PA.  The Fight Night broadcast will begin at 10 pm ET/7 pm PT.  The card is presented by Main Events and Peltz Boxing in association with BAM Boxing and Joe Hand Promotions. The co-feature bout and undercard fights will be announced shortly.  Tickets are going on sale soon; details to follow.