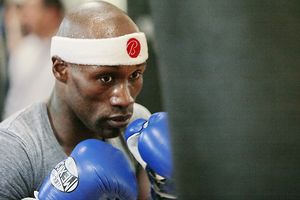 Since signing with DiBella Entertainment, Corley has put together back-to-back upset wins.  First, he defeated previously unbeaten Gabriel Bracero in New York in January and most recently, in May, he knocked out world title challenger Paul McCloskey in McCloskey’s native Ireland.  Now, Corley will look to make it three in a row when he takes on the Ukrainian Postol.

“I’m really looking forward to this fight and putting on a great performance tomorrow night,” said Corley.  “I have seen some video of him and I know that he is a tall, long guy, but that doesn’t worry me.  It is nothing that I haven’t seen before.  That being said, I don’t plan on this fight going the distance.  I didn’t come here to go 12 rounds and leave the scoring in the judges’ hands. I know how it is when you come into someone’s backyard. I have been here before, and I know that the best way to take care of business is to score a knockout and that’s exactly what I plan on doing. I am going to finish first and finish last.  That’s the game plan in this fight and from here on out. I would love to fight Danny Garcia after this, but I am willing to fight any of the top guys or champions from 135-140 pounds.”

At 38 years old, with a career that has spanned 16-plus years, the former WBO light welterweight champion Corley has fought everyone from lightweight to welterweight, including former or current world champions Floyd Mayweather Jr., Miguel Cotto, Zab Judah, Randall Bailey, Junior Witter, Devon Alexander and Marcos Maidana.  Corley has also been in the ring with current world-rated contenders Thomas Dulorme, Lucas Matthysse and Ruslan Provodnikov.