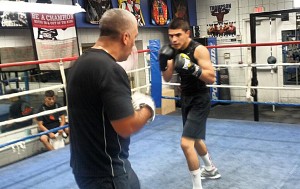 Cousin, of boxing legend Diego De La Hoya (8-0 6KO’s), made his professional debut in 2013. Since then he has fought eight times and has been progressing very nicely. Diego displays a good jab and understands distance very well.

He is explosive, has good hand speed and average punching power to go with it. Diego possesses an offensive style and loves to be the aggressor. He is fan friendly and also seems to have that animalistic killer instinct that fans love to see fighters have. In my humble opinion, he shows a lot of promise and potential and will one day become the world champion.

Since his debut in September of 2013, Diego De La Hoya has been staying active fighting every other month on average. His next fight will be on February 27th against Manuel Roman (17-3-3 6Ko’s) at the Fantasy Springs Resort in Indio California. Manuel Roman is by far the most experienced fighter De La Hoya has fought thus far in his professional boxing career.

Not only does he have 23 fights, but he has fought for the world title against Leo Santa Cruz. Roman started out his career as a flyweight but has since grown into a bantamweight/super bantamweight. He stands at 5’7 with a 67 inch reach that means size will not play a huge factor in this fight. Roman is clearly the best fighter De La Hoya has fought yet in his young career, and it’s a chance for Diego to make a statement in his first step up.