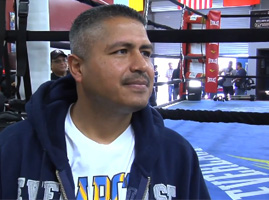 The jubilation in renowned trainer 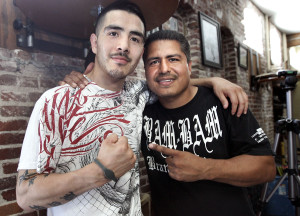 was clear when he spoke with Elie Seckbach for EsNewsBoxing.com directly after his man Brandon Rios had wiped out Mike Alvarado in the third fight of their trilogy. Garcia sat down with Seckbach in the lobby of a Denver hotel along with his son Peter, who read out fan’s questions for his dad to answer.

After such a convincing performance from Rios, one of the obvious questions pertained to who the rejuvenated Oxnard-native would face next.

“You know there’s so many options, Cameron Dunkin [Rios’s manager] is gonna handle that. You know we’re mentioning [Victor] Ortiz, honestly, I didn’t think HBO would approve that fight but we would love to, we would love to. But, you know there’s bigger names, bigger money fight; Marquez. I don’t think Marquez will fight him, but there’s Marquez. Hopefully, we can convince him to fight. Bradley is there.”

What a difference a day makes? Rios’s unimpressive DQ win over Diego Chaves last August. He had looked sloppy, slow and inactive before his opponent was disqualified following a number of infringements; nobody would be putting him forward with any degree of confidence to fight a name like Juan Manuel Marquez. After such a vicious display against Alvarado though, a whole world of possibilities has opened up. Garcia was less keen when the name of another revitalised welterweight was broached as a possible future opponent (on the proviso the two big networks could work together for it).

“Amir Khan is a very talented fighter man and you know it’s a big fight, a big money fight, but he’s very fast, very talented. It’s a fight that would be very difficult for both fighters because Brandon has a great fight on the inside.”

Another fight HBO and Showtime would need to co-operate with each for is the propounded rematch between Floyd Mayweather Jr and WBC World middleweight champion Miguel Cotto. This notion is one that increasingly pops up in the absence of confirmation of the Mayweather vs. Manny Pacquiao fight; an event clouded in Scotch mist. And according to Seckbach, longtime HBO announcer Jim Lampley confirmed Mayweather-Cotto 2 is going to happen, to which Garcia replied:

“I’m telling you that’s what I thought and hopefully that gives some people, some promoters the idea that loyalty is not always there like they always tell me and hopefully they learn. You know they treat one fighter very bad for being on [Showtime’s behind the scenes programme] All Access, without ever fighting on Showtime and then they got the guys that leave to Showtime and come back [to HBO], and they treat them the best. You know what I mean? Hopefully, that teaches them a lesson.”

Based on these comments, it looks as if Garcia is harbouring some ill-will against the HBO execs for their preferential treatment of Miguel Cotto after the Puerto Rican’s return from the rival network. And if I had to guess it would be because of severe treatment to his little brother Mikey Garcia. For merely appearing on All Access when he was helping Marcos Maidana prepare for one of his fights with Floyd Mayweather last year. Garcia the younger has been out of the ring for twelve moths now. Perhaps the sourness between himself and HBO are playing into the legal battle he is currently entangled with alongside his promoters Top Rank, as the two companies are so closely aligned. Who knew so many unforeseen difficulties would accompany such great success in the field of training fighters?