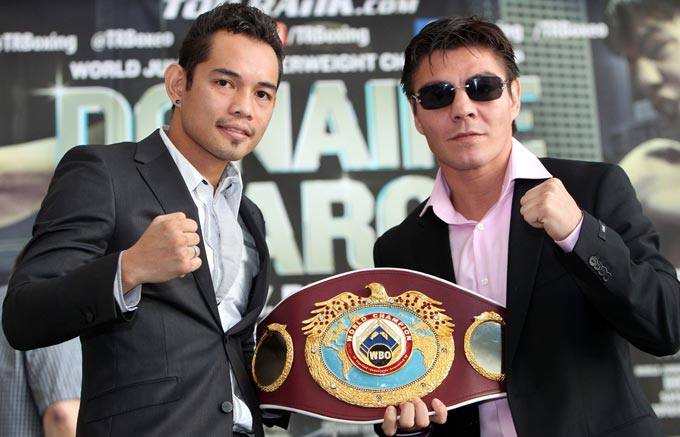 Houston, Texas is the largest city in the Lone Star State so isn’t it fitting that it get the biggest fight south of 140 pounds?

Tickets are priced at $200, $100, $60 and $30, plus additional fees, and can be purchased at the Toyota Center box office (Monday through Friday, 9 a.m. to 6 p.m.), online at www.HoustonToyotaCenter.com, by phone at 866-4HOU-TIX (866-446-8849) and select Houston area Randalls stores.  This prestigious event is promoted by Top Rank®, in association with Zanfer Promotions and Tecate.

“Nonito Donaire versus Jorge Arce is a much-anticipated world championship fight which promises to be non-stop action. We are also pleased to have undefeated Guillermo Rigondeaux defend his world super bantamweight title on this card,” said Hall of Fame promoter Bob Arum, CEO, Top Rank.

“The fireworks that will be supplied by Nonito Donaire and Jorge Arce in the ring on December 15 in Houston ensures that the season finale of World Championship Boxing will be very special night,” said Kery Davis, senior vice president of programming, HBO Sports.

Arce (61-6-2, 46 KOs), of Los Mochis, Sinaloa, México, is one of boxing’s most exciting and popular fighters.  A true warrior, he has been one of México’s biggest attractions for the last decade.  Arce is also experienced at the top levels of competition– a veteran of 18 world championship and eight interim world championship fights.  The all-action warrior has won world championships or interim world titles in all five divisions between 108 and 122 pounds.  A future first-ballot Hall of Fame inductee, Arce enters this fight riding an 11-bout unbeaten streak dating back nearly three years, including victories over Angky Angkota for the WBO junior bantamweight title, Wilfredo Vazquez, Jr. for the WBO junior featherweight belt and Angkota again, this time for the WBO bantamweight crown, the title Arce most recently held.  Trained by Hall of Famer Ignacio “Nacho” Beristain, Arce returns to the ring after winning a decisive unanimous decision over former WBO bantamweight champion Mauricio Martinez on September 22.

Rigondeaux (11-0, 8 KOs), of Miami, Fla., had a stellar amateur career, winning Olympic gold medals in 2004,and 2000, World Amateur Championship titles in 2005 and 2001, and Pan American Games gold medals in 2005 and 2003, all at 119 pounds, before defecting from Cuba and embarking on a professional career which began in Miami in 2009. In only his seventh professional fight where both fighters scored knockdowns, Rigondeaux captured the WBA interim super bantamweight title, winning a tough split decision over the vastly more experienced former world champion Ricardo Cordoba in 2010.  After successfully defending the interim title last year with a first-round knockout of previously undefeated former European super bantamweight champion Willie Casey, Rigondeaux won the WBA world super bantamweight championship with a sixth-round knockout of previously undefeated defending champion Rico Ramos on January 20.  Rigondeaux has successfully defended that title twice since then, blasting once-beaten Teon Kennedy in the fifth round, which included Kennedy suffering five knockdowns en route to the loss on June 9 and winning a dominant unanimous decision over once-beaten conender Roberto Marroquin on September 15.

Lee (11-0, 6 KOs), a native of Chicago who now fights out of Houston, is a 2009 graduate of Notre Dame where he earned a Finance degree from the Mendoza School of Business with a 3.8 GPA while winning the school’s legendary Bengal Bouts boxing tournament three years in a row as well as the 2009 Golden Gloves Championship.  Trained by Ronnie Shields, Lee has shown great potential as a fighter while attracting Madison Avenue to the sport as a national spokesman for Subway Restaurants where he has been featured in the company’s nationally-televised advertising campaigns.  Lee has also proved to be a powerful box office attraction, packing houses with rabid and loyal University of Notre Dame fans, students and alumni.  Lee returns to the ring fresh a unanimous decision victory over Paul Harness on September 15.