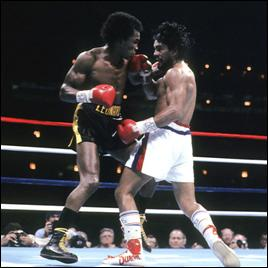 NEW YORK – No Más, a documentary by Emmy award-winning director Eric Drath, is set to premiere on ESPN Tomorrow!  Tuesday, October 15, at 8 P.M. ET. As part of the Peabody award-winning ESPN 30 for 30 series, the film chronicles the events surrounding the legendary 1980 boxing match between Sugar Ray Leonard and Roberto Duran. This fight proved to be a career crossroads for two of boxing’s biggest stars and delivered a memorable phrase that has taken on a life of its own.

Billed as the rematch of the century after a thrilling title bout only five months earlier, fans across the world expected an unforgettable showdown, but no one could have foreseen the result. No Más examines the impact of two words and how it shaped the legacies of both fighters in the midst of a contemporary golden age for the sport. The film reunites both fighters present-day in order to achieve final closure for one of the most shocking moments in boxing history.

Viewers follow Sugar Ray Leonard as he embarks on a personal journey to Panama to confront his old nemesis once and for all. As we relive Leonard and Duran’s two epic 1980 bouts, we listen to interviews from both fighters’ camps, their families, and celebrities with the likes of Christie Brinkley, Mike Tyson, and Showtime’s Steve Farhood.

No Más unveils for the first time what really happened as Drath takes viewers behind the scenes of these two fights. This 77-minute documentary relives the glory of their fights and revives their iconic rivalry for a new generation. His first documentary feature, Assault in the Ring, aired on HBO and received the 2010 Emmy Award for Outstanding Sports Documentary. Eric has also directed two other 30 for 30 films – a short film about baseball legend Pete Rose, and Renée, a feature on transsexual tennis sensation Renée Richards.