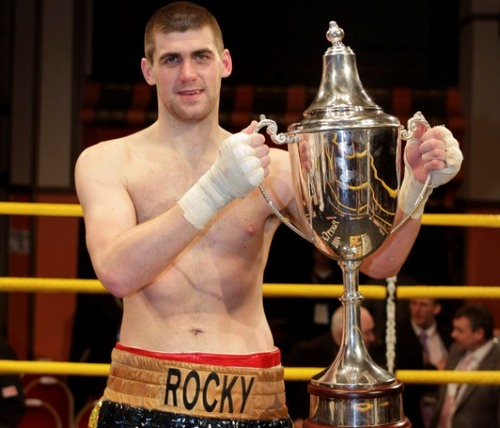 Rocky Fielding will defend his English super middleweight title against Tony Dodson at the Liverpool Olympia on September 21, live on Sky Sports, part of a bumper Merseyside bill in association with Coldwell Boxing.

The all-Merseyside affair marks the second defence of the belt that he won at the same venue against another Liverpool rival Carl Dilks with a fifth round stoppage in October 2012. The unbeaten 26 year old Fielding saw off tough Sheffield tyro Wayne Reed in March with a sixth round stoppage, and steps up in class against a man he knows well to kick off a new season he hopes to land the British belt held by another Liverpool man, Paul Smith.

“This is definitely going to be one of the toughest fights I have had so far,” said Fielding. “It is going to be a good fight, I have done plenty of rounds of sparring with Tony and I know how to go about him. I will stick to my boxing and look good and send a bit of a statement out that I am ready for the next step. It will be a good fight while it lasts but I am confident I will come away with the win.

Last time out, Dodson was stopped by Smith in a top class fight in Bolton in June for the British strap, with the 33 year old going toe-to-toe for six rounds with ‘Smigga’, and for Fielding, it’s a chance to test himself against a man who has had a big influence on his career on a bit night for the proud boxing city.

“I used to meet him in a pub car park and we would drive up to the gym together and train and spar together,” said Fielding. “I have a lot of respect for him. There will be nothing over Twitter, no slagging him off. I always watched Tony throughout his career and always wanted to share a ring with him.

“As a kid I used to bunk off school to go to the gym to watch Tony spar when he was young and when he was British champion. I used to sit there and watch and he was good, and to go from watching him as a kid, so to actually get in the ring with him now, you couldn’t write that.

“It is a big fight for Liverpool, the phone hasn’t stopped since it got announced. The city of Liverpool is a proper boxing city, people get behind the boxing and the Scouse lads and this is too Scouse lads fighting each other. It is an early Christmas present for them because they can sit back and watch two Scousers have it with each other. Fans in Liverpool are in for a good show.”

Fielding’s clash with Dodson is part of a huge night of boxing on Merseyside with hometown favourite Derry Mathews defending his Commonwealth lightweight title against Curtis Woodhouse at the top of the bill.

Liam Smith and Erick Ochieng’s clash for the vacant British light middleweight title was originally scheduled to take place in Sheffield but a request has gone into the BBBoC for the fight to be moved to Liverpool.

Callum Smith will use the show to press his claims for a first title shot after notching four first round wins in a row, as will Team GB Olympic captain Thomas Stalker who cruised to 5-0 with two first round stoppages in his last two fights while Robbie Davies Jr. returns to the scene of his debut triumph in June.

Information on ticket prices and on sale dates will be released early next week.