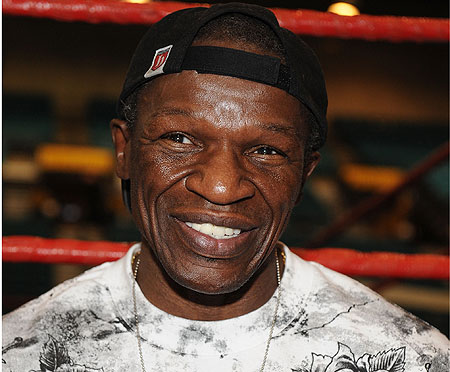 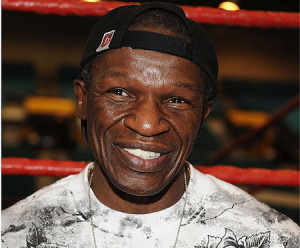 Dontae’s Boxing Nation’ recently gave Floyd Mayweather Jr’s(47-, 26KO’s) rambunctious father a forum in which to voice his indignation at the news of his son’s upcoming opponent, Manny Pacquiao(57-5-2, 38KO’s), using the patented Mayweather shoulder-roll defense in preparations for their fight on May 2nd.

Mayweather Jr has ensured his longevity in this brutal sport with an uncanny ability to avoid most of the punches that are thrown his way. When a blow does land, it is rarely flush, which is crazy when you consider he has been facing world class opposition for the better part of two decades. His reflexes and timing play a big part in keeping his features smooth too, but the defensive stance he snaps into when he chooses to deflect punches – a variation of the ‘Philly Shell’- is almost impenetrable.

His right gloves raised to cover that side of his jaw while the left glove covers his midriff with that shoulder jutting upwards to completely cover the lower half of his face. Both elbows are cocked at ninety degrees. The punches come, and he twist and bends at the waist avoiding most of them. The ones that do get through skim infuriatingly off a shoulder or an elbow or a glove. Mayweather Jr’s version of this stance is the best since James Toney exhibited it in the 90’s, only better. He takes far less punishment.

The fluidity with which Mayweather Jr puts this into practice can only be achieved through years upon years upon years of practice which is how he did it. Learning from his father Floyd Sr, who boxed in the 1970’s and 80’s, even sharing the ring with ’Sugar’ Ray Leonard at one time. Daddy Floyd seemed genuinely amused when told that Pacquiao might be trying the unlock the very technique that helped his boy become so successful.

“He can’t do the shoulder roll! He can try all the shit he wants to, he try to roll like that he gon’ get hit every time. In two months, you don’t learn that. That takes years and years; I’ve been there, I done it.”

For Pacquiao, the futility of adopting such a foreign tactic at this stage in the game seems foolhardy. I don’t know where the information came from that he has been attempting the shoulder roll, but trying to pull it off against Mayweather Jr would be like trying to out-sprint Usain Bolt; just not worth it.

Floyd Sr has always been dismissive of Pacquiao’s chances in this fight, regardless of any new approaches he may be trying in the gym. He outlined his perspective simply;

“Mayweather fighting guys 20 .lb. over his weight and he beating their asses. What the hell you think he gon’ do to Pacquiao?”

Pacquiao was once a flyweight and is a very small entry in the 147 .lb. Class, small compared to Mayweather Jr even, who has made a similar ascent though the divisions over the years himself. Floyd Sr is using this dynamic to outright dismiss Pacquiao on the basis of size, the logic being that if his son can school ‘Canelo’ Alvarez like he did in 2013( who came into the ring weighing about 170 .lb.) he should have no problem doing it to the smaller man.

This is an oversimplification, to say the least. Canelo has slower feet and hands, less lateral movement and doesn’t throw combinations in the same volume or frequency as Pacquiao. They’re two completely different fighters, but Floyd Sr knows that. You can’t expect him to start making a case against his own kin can you?