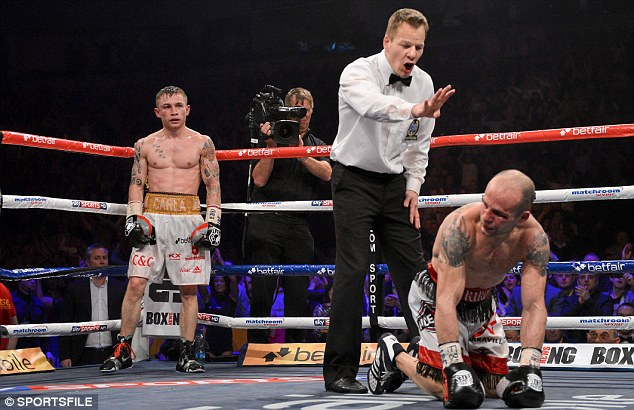 BoxNation viewers are in for a real treat with Irish dynamo Carl Frampton’s world title showdown with reigning IBF super-bantamweight world champion Kiko Martinez set to be shown live and exclusive on the channel.

The world’s biggest and best dedicated boxing station is delighted to be airing the undefeated Ulsterman’s first stab at a world title on September 6th, with the Northern Ireland venue to be confirmed.
The 27-year-old Frampton is gaining a reputation as a real crowd puller, after galvanising a horde of fight fans with his big-hitting and all-action style. Much of the same is expected when he takes on the Spaniard Martinez, who he previously overcame early last year via a 9th round stoppage.
Martinez subsequently went onto claim the IBF crown with victory over the then unbeaten Jhonatan Romero, and has gone on to make three impressive defences, with his aim now to show he has learned from his loss to Frampton when they meet up again.
A jubilant Frampton stated: “I’m over the moon to be fighting for a world title in my hometown. I have to thank my team for making this happen and now it is time for me to deliver. I am fully focused on September the 6th and Kiko Martinez. It’s been my dream since I started boxing to become a world champion and I have worked so hard to get this far, now is the time for me to fulfil that dream in front of the best fans in the world.”
Martinez is also very focused on the impending task at hand, he said: “Since the 9th of February 2013, when I get up at five in the morning to go training, I remember him. For me, to defeat him is a greater motivation than the chance to unify the belts. I will never forget that night and I will prove that it was just a bad day for me. I am world champion now and my legacy will be bigger for facing Carl Frampton.”
Cyclone Promotions CEO Barry McGuigan is thrilled to have brought Frampton’s world title challenge to Northern Ireland. He said: “It’s here! Carl Frampton will be boxing Kiko Martinez at home for the IBF world super bantamweight title and we are delighted! Martinez versus Frampton is one of the most exciting fights out there and what a battle it will be on the 6th of September. Carl has proven time and again that he deserves to be a world champion and now he will get his chance to become one, in the best circumstances possible, without any options on his future and in front of his devoted home fans. Cyclone Promotions have worked tirelessly over the past couple of months to secure this fight and we are overjoyed for Carl. We are in discussions with a number of venues and we will announce the venue of the fight shortly.”
BoxNation Managing Director, Jim McMunn, said: “Carl Frampton is one of the most exciting fighters in the British isles and the nights in Belfast have been phenomenal. Now that Carl is fighting for a world title the atmosphere will go to another level.  We are delighted this fight is on BoxNation, the viewers will witness something very special.”
Frampton’s world title bid comes after a stacked summer on ‘The Channel of Champions’ which sees BoxNation set to host the world’s most eagerly anticipated bouts, starting with Sergio Martinez’s world title defence against Miguel Cotto this weekend.
Tweet