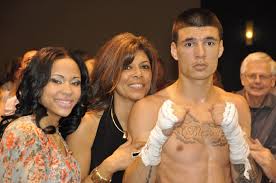 “The plan tonight was to box and to dig to the body. We thought if I did that, the knockout would come,” Hernandez-Harrison said. “My Dad and I watched video on my opponent, came up with a game plan, and I executed it tonight.”

Hernandez-Harrison scored knockdowns in both the third and fourth rounds along with two standing eight counts before the referee was forced to the stop the fight following a vicious assault from the Southeast Washington, D.C., native. With the win the WBC Youth Welterweight Champion improved his record to 22-0 (12 KO), just days before his twentieth birthday.

“It was a great fight for Dusty and exactly the kind of performance I wanted from my son,” trainer Buddy Harrison said. “Hopefully, Dusty will be back home soon because I know his fans in Washington can’t wait to see him.”

Currently World ranked No. 15 by the WBO and No. 18 by the WBC, Hernandez-Harrison will soon be making a major announcement regarding the next step in his career that will have a major impact on his rise up the ranks towards a World Championship and international superstardom.

“As we look ahead to some big fights during the second half of the year, the goal was for Dusty to display his superior boxing skills and control the tempo of the bout. Mission accomplished,” said Jeff Fried of All In Entertainment, Hernandez-Harrison’s promoter. “Dusty is a fan favorite, and his desire to be great was reflected in his training camp work ethic, and translating into his solid performance this evening,” added Fried.

Following his birthday this week, the major announcement regarding Hernandez-Harrison’s future fight plans and elite level bout will be made.