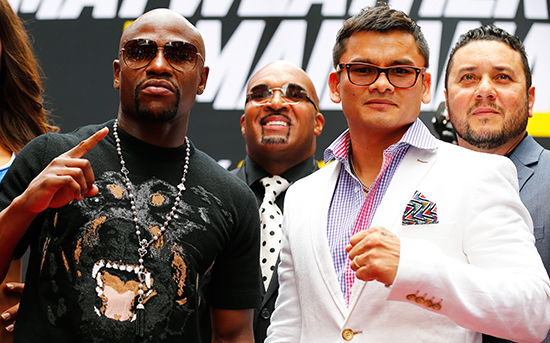 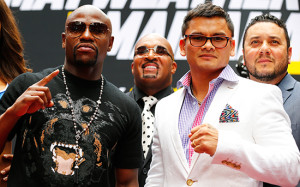 Marcos Maidana will face Floyd Mayweather Jr. in a rematch September 13. Leading up to this fight, ThaBoxingVoice.com spoke with the trainer of Marcos Maidana, Robert Garcia. Garcia spoke about the situation surrounding the gloves, the training camp, and the upcoming fight.

On May 3, 2014, hours before the first fight between Floyd Mayweather and Marcos Maidana, the self-proclaimed ‘best ever’ decided that Marcos Maidana wasn’t allowed to use his Everlast MX gloves. Many insiders claim that Marcos Maidana was compensated with 1.5 million dollars in order to use the gloves that Floyd Mayweather approved. In response to these rumors Robert Garcia said, “I don’t believe that. That is not something ‘The Best Ever’ would do. Paying 1.5 million dollars for that shows you are really scared to get hit. That is something that cowards would do.”

Which gloves Marcos Maidana will be allowed to use is not 100% certain at this point. According to the California based trainer, it will likely be the same gloves that he was forced to use in the first fight. On the gloves Garcia told us, “The Everlast Powerlock glove is a good glove. The problem in the first fight was that Maidana never used them before, but now we are training with them, so it won’t be a problem.”

While the gloves won’t be a problem according to the trainer, he still does not understand why his fighter isn’t allowed to use certain gloves. “Cotto used the MX gloves against Floyd and Guerrero used the Reyes gloves but we were told that both are out of the question. I don’t understand it.”

Marcos Maidana will definitely step in the ring on September 13 with a lot of confidence. “In the first fight Maidana still had questions how good and how fast Floyd was”, Garcia told us. He later continued, “But now that he knows that Floyd isn’t as fast and doesn’t hit as hard as people say, it will only give him more confidence, and while we can not speak for the judges, we felt as winners coming out of the first fight.”

To conclude the interview ThaBoxingVoice.com asked Robert Garcia what the plans are if Marcos Maidana manages to beat Floyd Mayweather. Will they go for a trilogy, or will they be looking for other fights. Garcia answered, “If the fight is close, we will definitely entertain a third fight. If we win by knockout, then we might look for other opportunities.”