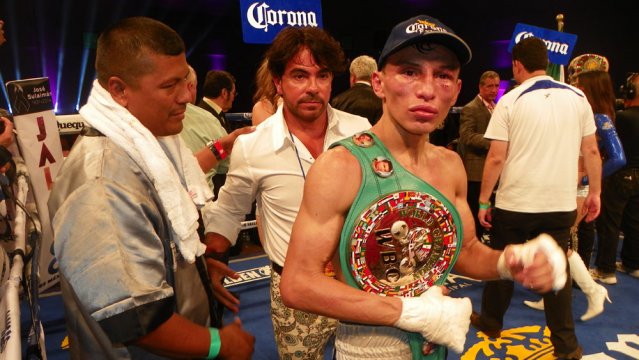 Professional and amateur boxing talent will participate in a special Memorial Day edition of Golden Boy Live! on FOX Sports 1 and FOX Deportes this Monday, May 26 in salute to the men and women of the Armed Forces at Fort Bliss’ Stout Fitness Center in El Paso, Texas.

The evening is headlined by Nicaragua’s Rene “Gemelo” Alvarado’s WBC Silver Featherweight Title defense against perennial contender and Texas-native Rocky Juarez, and the co-main event will be top welterweight prospect KeAndre Gibson (9-0-1, 4 KOs), who faces Puerto Rico’s John Nater (13-5, 10 KOs) in an eight-round fight plus in a battle for Texas Ryan “Cowboy” Karl will make his professional debut against Dallas’ Wilbert Mitchell in a four-round welterweight swing bout.

Three members of the Army‘s World Class Athlete Program (WCAP) will be represented, with Two-Time National Champion Alexandra Love (51-8) of Monroe, WA facing the Bronx’ Juliette Ladisa (13-5) in a four-round flyweight bout that opens the televised portion of the event. Also representing the WCAP will be National Golden Gloves winner Marquis Moore(60-15) of Temple Hills, MD, who takes on San Antonio’s Lachi Allen (28-5) in a middleweight bout and number one-ranked light heavyweight Steven Nelson (38-4) of Omaha will meet Mesquite’s Adrian Taylor (70-10). Both Moore-Allen and Nelson-Taylor are scheduled for three rounds.

Kicking off the event will be a four-round welterweight bout between unbeaten professionalsBryant Perrella (4-0, 3 KOs) of Fort Myers, FL and Benito Tovar (3-0-1, 3 KOs) of Milwaukee, WI. This night of appreciation for the troops will be free to members of the military, with no tickets being sold for the event.

Alvarado vs. Juarez is a 12-round bout for Alvarado’s WBC Silver Featherweight Title that is presented by Golden Boy Promotions and sponsored by Corona and O’Reilly Auto Parts. The doors open at 5:00 p.m. MT and the first fight begins at 5:30 p.m. MT. The FOX Sports 1 and FOX Deportes broadcast airs live at 9:00 p.m. ET/7:00 p.m. MT/6:00 p.m. PT.