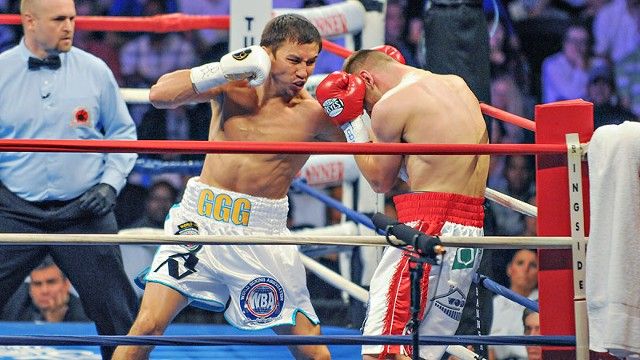 When middleweight Gennady Golovkin was unleashed on American shores last month, the one term that came to mind to people in boxing circles, including that of HBO analyst Max Kellerman, was one word: wow. Kellerman went on to say in the broadcast on September 1st, “There is a monster loose in the middleweight division,” after Golovkin dismantled a game Gregorz Proksa at the Turning Stone Resort and Casino in Verona, New York.

Golovkin who was once known for his you tube highlights became must see TV instantly. Golovkin had long been the mandatory for long time WBA Super Champion, Felix Sturm, who had lost earlier in the day to now unified champion Daniel Geale.  Golovkin still the ‘regular’ WBA middleweight champion now became the mandatory to Geale in a fight that would seemingly get the attention. Unfortunately for Golovkin, Geale took another route and is now facing his Australian rival in Anthony Mundine.

The monster Golovkin is now without a high profile opponent. Tom Loefler of K2 Promotions had wanted for Golovkin to return with or without an HBO date by December and most presume he would since Loefler has had great success with The Klitschko brothers minus any help from HBO.

When Max Kellerman was interviewed by ThaBoxingVoice.com, he had mentioned that something like this would happen because of the statement GGG made that night in Verona. “No one’s going near Golovkin. Whoever is the money man in the division whether it’d be Martinez or Chavez are going to let the good European fighters play traffic cop on Golovkin. They’re going to put Dmitry Pirog in with him and Pirog’s a good fighter.  I think Golovkin wins in a good fight. They’ll put him in with Matthew Macklin, whoever they can send to play traffic cop for GGG but Golovkin’s coming,” explained Kellerman.

Golovkin was coming for Geale but Geale has chosen another opportunity and allowed someone else to play traffic cop instead.  Golovkin has stated that he would fight at 154-168 and stated that they would move to 168 to take on Pavlik. Kellerman says that anyone can get it minus one. “Golovkin’s easy to hit, does not move his head, but there’s something next level about him.  The better the opponent, the better Golovkin fights, and that has me looking forward to who Golovkin fights. Now the question is who’s willing to get in there with him. The one guy I’d favor against him and that might be the one guy Golovkin doesn’t want to fight and that’s Andre Ward, he’s too good. Other than him, who would you favor against Golovkin?”

His trainer Abel Sanchez expects him to return this December and was not one bit surprised Geale turned down the fight with his fighter to take on Anthony Mundine. “GGG came in last Friday and we started training for a fight in December. Honestly Geale wasn’t going to take the fight; I don’t think Gary Shaw (Geale’s promoter) was keen on the idea, especially if they have an easier fight elsewhere.”

As with Tom Loefler, Sanchez agrees that Gennady needs to return with or without the backing of HBO but wants Golovkin to get his just due of being a world champion. “The fight in December won’t be on HBO because it their schedule is already full but Tom (Loefler) is looking at other champions, but in reality it doesn’t matter who Gennady’s opponent is, they’re getting knocked out either way. I want Gennady to be world champion. At this point Gennady isn’t even the real champion; we chased Sturm for two years so we’re going to chase this guy (Daniel Geale) for another 2 years, that’s crazy.”

In the last part of my talk with Max Kellerman he says the one fight we all want to see at middleweight is Golovkin-Martinez. But at the present moment the monster that Kellerman said was running loose in the division, is left without an opponent to terrify.