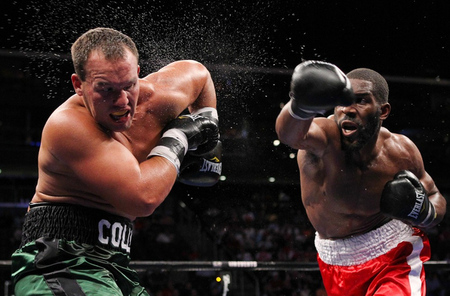 On the undercard at the Prudential Center in Newark, NJ last night it proved to be an entertaining card. Philadelphia’s Bryant “By-By” Jennings looked good as expected. Shutting out Steve Collins of Texas, all three judges scoring the fight 100-89.

Jennings started strong and set the pace early. While Collins tried to make it a fight on the inside, however Jennings showed dominance as the better boxer. Collins briefly had Jennings on the ropes in the fourth round but was quickly turned around by Bryant who ended the fourth round hurting Collins with a combination. Collins was hurt again in the sixth and ninth, but managed to stay up and finish the fight.

Another Win for Philadelphia last night was Jamaal “Da Truth” Davis looking good against Doel Carasquillo. In what was originally supposed to be a swing bout, Davis got the chance to be seen on NBC Sports network as a fill in for the Curtis Stevens fight that fell through. While not much could be said for the level of opponent in Carasquillo, those who have seen Davis a few times over the past few years, myself included, notice a significant improvement and vows to continue the improvement as stated in the post fight press conference.

It was also a good night for the local boys. With Jose “Mangu” Peralta of Passaic, NJ scoring a fourth round TKO over Cambridge, Maryland’s Dantre “Pound for Pound” King.

While Jersey City’s own Patrick “Paddy Boy” Farrell won a four round unanimous decision, with a large crowd behind him and huge heart inside of him, like most Irish fighters, he survived a hard fourth round to finish the fight and win the decision.

Also winning one for the home team was Newark’s John Thompson who fought to a six round Unanimous Decision victory over Washington DC’s John Mackey, maintaining his undefeated record and advancing to 8-0.

And while not a local boy it is worth mentioning that Tureano “Reno” Johnson won a unanimous six round decision over Roberto Young, with all three judges scoring the fight 58-56.