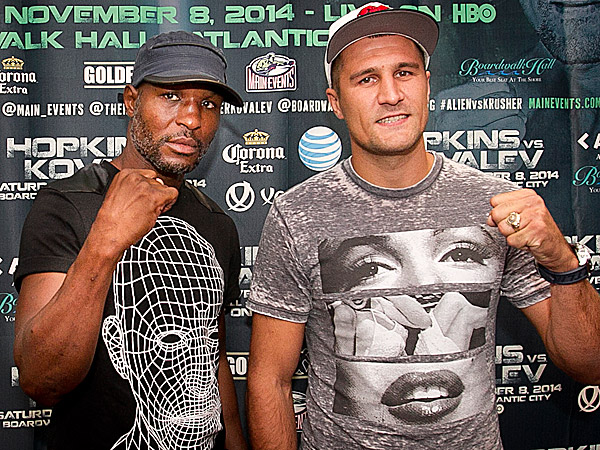 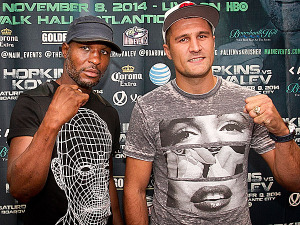 Bernard “The Alien” Hopkins (55-6-2, 32 KOs) isn’t the first elder statesman of the sweet science to hold the light heavyweight crown.

With a win on Saturday, November 8 against WBO Champion Sergey “Krusher” Kovalev (25-0-1, 23 KOs at Boardwalk Hall in Atlantic City live on HBO World Championship Boxing®, Hopkins would be just one belt away from becoming the first fighter in boxing history to hold all four major alphabet titles simultaneously in two different weight divisions.

He’s already the first man to hold all four major alphabet belts in any weight class.

When the 49-year old unified light heavyweight champion puts his titles on the line against the 31-year old knockout artist Kovalev, he will be looking to raise the standard yet again.

That the feat could come at light heavyweight does fall in line with some of the all-time great pugilists who found accomplishment in the same division past their 40th birthday.

In November 1903, former middleweight and heavyweight world champion Bob Fitzsimmons outpointed George Gardner over 20 rounds to win the light heavyweight crown and become boxing’s first three-division champion. Fitzsimmons, at 40-years-old, was four years removed from losing this heavyweight title. It is an accomplishment that adds to his legend more than a century later. Fitzsimmons would hold the title until 1905 and, while he continued on for many years, would never win a title again.

“The Old Mongoose” Archie Moore was 39-years-old when he finally overcame years of hard climbing to defeat Joey Maxim by decision for the light heavyweight title in December 1952. Just shy of his 45th birthday, Moore came off the mat four times to keep the title in a legendary war with Yvon Durelle in December 1958.

George Foreman won the WBA and IBF Heavyweight crowns from Michael Moorer at age 45, but never pushed any further.

Unification at light heavyweight has been rare even among younger men. Michael Spinks was 27-years-old when he defeated Eddie Davis to become the undisputed light heavyweight champion in February 1984. Virgil Hill was 32-years-old when he defeated Henry Maske to unify the WBA and IBF belts in November 1996. Attempting to add the WBO title in his very next fight, Hill was defeated by the 29-year old Dariusz Michalczewski in June 1997. A 30-year-old Roy Jones Jr. unified the WBA, WBC and IBF titles with a win over Reggie Johnson in June 1999.

What we are witnessing is a singular pursuit of the extraordinary by a fighter already respected by his peers as one of the genuine greats.

Hopkins has always made the extraordinary look ordinary, considering that Hopkins was thought to be old for the sport when he completed his unification of the middleweight division with a ninth-round knockout of Oscar De La Hoya in 2004 at age 39. Ten years later, against larger men, he’s halfway there again.

Hopkins’ road to light heavyweight unification started when he came off the mat twice at the age of 45 to earn a draw with then-WBC Light Heavyweight Champion Jean Pascal in December 2010. Six months later, in May 2011, Hopkins became the oldest world champion in boxing history (for the first time) with a rematch decision over Pascal, winning the WBC and Ring Magazine titles.

Despite losing that title in a close decision to Chad Dawson, Hopkins remained determined and convincingly defeated IBF champion Tavoris Cloud to break his own record as the olden man ever in boxing to win a world championship

Two fights later, Hopkins defeated Beibut Shumenov in April of this year to win the WBA Light Heavyweight World Championship. The victory over Cloud made Hopkins the oldest major title winner in the history of the sport; Shumenov made him the oldest to unify a share of any title.

Unification isn’t easy at any age. At 49-years-old going on 50, against one of the most feared offensive machines in the sport in Kovalev, it’s remarkable in the attempt alone. History says Hopkins has always been capable of remarkable new chapters of boxing history. He’s been writing and rewriting the history books for years.