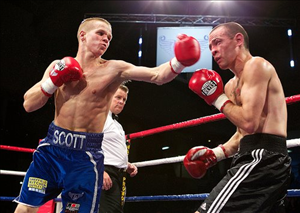 Sheffield super-featherweight Scott Jenkins has barely put a foot wrong in the first three years of his professional boxing career and has thirteen straight victories and seven knockouts to his name as proof. But next year he hopes to kick on and start adding domestic titles to his resume.

“I want to be fighting for domestic titles and getting my name out there in Britain,” he said. “That’s definitely my plan for next year.”

“For now, though, I’m just concentrating on winning and improving. The rest is all down to my team. I’ve got a great team around me and I’m confident they will guide me in the right way.

“Don’t get me wrong, I’m pressuring them and I want to move fast. But it’s all about getting the timing right. I’ve been cruising through six rounders and I know I’m ready to step it up.”

Though a super-featherweight for the time being, Jenkins admits his options are open and that a foray into the stacked domestic lightweight division isn’t out of the question.

“I’m hoping I can stay down at super-featherweight, but I’m maturing and growing and that may mean I’ll fight at lightweight one day,” he said. “We’ll wait and see. All I know is there are some great fights for me at both of those weights. Domestically, the super-featherweight and lightweight divisions are packed full of top fighters and big names. I’d love to get in the mix with them next year.

“When the time is right, I’m ready to face those top names. To be the best, you’ve got to beat the best, and I’m prepared to do just that.”

Last time out in April, Jenkins halted Spain’s David Martin Campillo in the fifth round. It wasn’t just the toughest test of Jenkins’ young career, it was also his best performance so far.

“I knew going into the fight that it was a step-up,” said the 23-year-old. “But I went in and grew in confidence as I went along. I thought I did a good job on him and boxed well.

“The better the opponent, the better I’ll box. The beauty of fighting better opponents is that they don’t tuck up and look to survive. They actually have some ambition and try to fight. That gives you more opportunities to hit them.”

This coming Saturday night (September 20) at the Ponds Forge Arena, Jenkins competes in his fourteenth professional fight against Jan Holec. It will be the fifth time he’s fought at the venue and ‘Hot Shot’ is keen to maintain his win-streak and set up bigger nights in the future.

“By this time next year I hope to have either won the English title or the British title,” he said. “Until then, I want to keep building up the experience and doing the rounds. Give it twelve months and I’ll be ready to win big domestic titles.”

***On Saturday night (September 20) in Sheffield, Kid Galahad collides with dangerous Brazilian Adeilson Dos Santos in a battle of unbeaten super-bantamweights, and Adam Etches faces big-punching Brazilian Samir Santos Barbosa, live on Channel 5 in the UK and on SporTV in Brazil and on FightNetwork in Canada and is sponsored by MaxiNutrition.***

Tickets for the Hennessy Sports promoted event at Ponds Forge, Sheffield, priced at £35 general admission and £100 ringside are available to purchase by calling the SIV ticket box office on 0114 223 3777.

Tickets are also available from www.sivtickets.com or in person at the Sheffield City Hall, Crucible Theatre and Motorpoint Arena Sheffield.