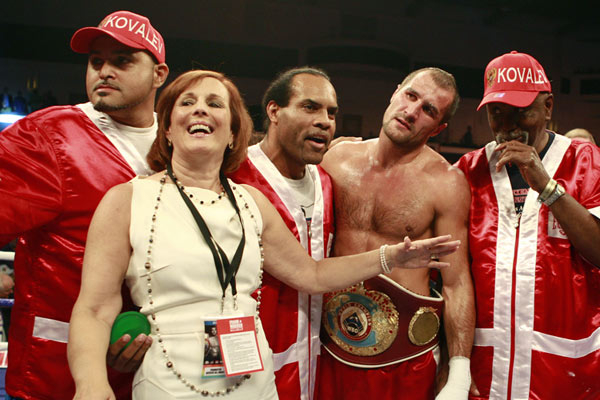 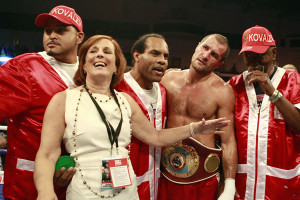 In a day and age where promoters are getting as much attention as their fighters, Kathy Duva is one who hopes to remain the exception. With her focus solely on her brand and her fighters, she is one who demands that attention be brought and focused on the fighters that have earned it. This holds especially true with her most valuable signee, Sergey Kovalev. On August 2nd, Sergey Kovalev face Blake Caparello in a fight that turned out like most of the others. Kovalev managed to blitz past Carparello in two rounds, but it came after Kovalev had to taste the canvas himself in the opening stanza. It was a rare moment for the man called “Krusher”, but one that the media and fans alike have latched onto. It’s a point that Duva is quick to cite and correct as she offers her view of the knockdown.

“Well, when I say [Kovalev] go down in the first round I thought, yeah, that’s from a loss of focus for a moment. Think about the pressure that was on him tonight. We never want to sign a contract for a big fight the day before a big fight like this one, but we had a situation with the IBF which hadn’t helped so just another testament to his ability to withstand [sic]. This kid has been through a lot of stuff that has gone wrong in his career, and certainly since he’s been with us. He’s had his fight, the first time he was supposed to be fighting Campillo, who by the way turned out to be a lot less shot than everybody thought he was,  and that fight got kicked. [Kovalev] had to wait before he finally fought him. We had to go to England to fight for a title. Nothing got handed to him.” The IBF issue that Duva refers to is the fact that the contract to face Hopkins in November was signed the day before Kovalev entered the ring to face Caparello. Whether it acted as a distraction or not, Kovalev managed to “fold” Caparello like so many others before him. Now, all focus for Kovalev and his team is the Hopkins fight in November. “Obviously, it’s a fight Sergey wants very much, and it’s a fight that we’re very actively pursuing. Sergey has said from the start that he just wants to fight the very best and test his skills against the very best. He just wants the big fights and I think that’s the mark of great fighters; that’s all they want to do [sic] is be in big fights. We couldn’t be more happy.”

With the paper work being signed, some negotiations are still taking place. Mainly, where exactly the fight will take place considering the audience both personalities will command. “Basically, Brooklyn wants it and Atlantic City wants it so we’ll see who wants it the most.” Still, fans are quick to point out a few concerns as the rumored fight date between Kovalev and Hopkins approaches. One of the big questions asked to Duva was how she approaches the match-up with Hopkins as a promoter, and whether she holds any reservations. After all, Hopkins has made a career of derailing hype-trains and ruining the image(s) of some promoters biggest fighters (e.g. Don King and Tavoris Cloud). “Absolutely not. I was thinking about this the other day: Ray Leonard fought Roberto Duran early in his career. Most of you probably don’t even remember who lost that fight. You can’t fear losing and back down from a challenge; you can’t fear loss. Leonard, Hagler, Hearns, Duran, Tyson, Lewis, Holyfield, Bowe, that whole crew, if they thought, ‘Oh gee, that’s not gonna be good for my brand if I lose”.

What the hell happened to this sport? The whole idea is that you get in the ring, you fight the best, you test your skill, and when that happens, when two fighters get in the ring, there is no loser because both will have a career; both will move on. I bet none of you realize when you think of it off of the top of your head , ‘What’s the biggest win Mike Tyson ever had?’, it was probably Michael Spinks or Larry Holmes. He lost big fights, but he’s Mike Tyson because he took them. So no, I have no reservations.” Duva’s take is certainly a refreshing one, but one can’t help but further question some of the opposition Kovalev has faced up to this point. With none of the Russians fights going past eight rounds, one has to decide whether Kovalev is in fact that good or his opposition has just been sub-par. This lack of ring time has led some to question whether he may actually be prepared to face a fighter a crafty as Hopkins. Could it be that Kovalev’s lack of challenge could actually hurt his chances of defeating Hopkins? “No, not at all. [Kovalev] wants to fight a greater challenge, but most of them have all folded like this. He wants to get in the ring with somebody who won’t. That’s the whole point so, no. Like all the other fans out there I just want to see what he does.”