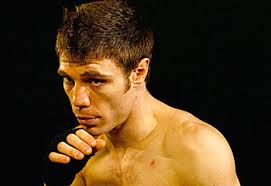 Michael Katsidis says he’ll prove he can still be a force in the Lightweight division when he takes on Tommy Coyle for the IBF International title at the Ice Arena in Hull on October 25, live on Sky Sports.

The Australian secured a pair of wins earlier in the year in his hometown of Queensland, a third round stoppage in March before a shutout twelve round win over old World title foe Graham Earl in July.

The 34 year old has left no stone unturned in his preparations for Coyle, landing in the UK in September and teaming up with former British champion Maurice Core in Manchester. ‘The Great’ has faced questions over how much he has left in the tank but he insists he’ll answer the critics in style and can become a force in the Lightweight division.

“I’m here to prove that I still have plenty left to offer – and there will be no questioning my future after Hull,” said Katsidis. “I’ve been over here for a while, settling in, getting comfortable in his backyard and ready to perform at my best on the night. I don’t know much about Tommy, but I know that he is in for a tough night on the 25th.

“I’m really enjoying the training and I love being in England. The Lightweight division over here is really flying, there’s some great fights here for me, and a big win over Tommy will put me right back on the map.

“It’s an honour to be working with Maurice in Manchester, he’s worked with some great champions like Prince Naseem Hamed, and we’ve really clicked so everything is in great order. I love boxing and this is what I do, this isn’t a job for me, this is love.”

Coyle’s clash with Katsidis headlines a fantastic night’s boxing at the Hull Arena which also features Luke Campbell MBE against Daniel Brizuela and Gavin McDonnell stepping into international waters for the first time against Vusi Malinga. Samir Mouniemne continues on the path back to title contention and the show also sees a showcase of local talent with Nathon Smith, Tom Knight, Charlie Payton and Connor Seymour.