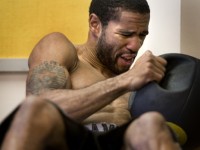 If you were confused by yesterday’s news that the rematch between Amir Khan and Lamont Peterson might be off because Peterson tested positive for a banned substances, well the news coming from VADA and Keith Kizer as mentioned by Golden Boy CEO Richard Schaefer has brought more questions and confusion to the situation.

According to Keith Kizer which was mentioned on the call set up by Golden Boy, the urine sample that was taken from Peterson that tested positive was taken on March 19th unannounced and randomly done right after the presser to announce the rematch. The samples were transported by VADA to the laboratories of UCLA for testing. The samples were split into an A and B sample, one was sent to Nevada and one remained with VADA at the lab. Kizer then sent a letter to Peterson informing him that he had tested positive for an anabolic steroid.

VADA then informed Peterson on April 13th that he tested positive for a banned substance and advised him he could contest, Peterson chose to contest it and had representation with him at the time of the retesting. Golden Boy nor Amir Khan was notified of this positive test, just Peterson and his team.

Had Schaefer been notified he says, “He would have tried to get the matter expedited as quick as possible”. By April 30th, there were more thorough results of the testing of what Peterson had tested positive for which is a synthetic testosterone.

It may have come to everyone as a surprise but Richard Schaefer agrees, “The sport of boxing needs random drug testing because it is a combat sport and is different than other sports because you’re not using it to hit a baseball or jump higher in basketball”. Whatever the case may be and the outcome of the situation results in, it has been a set of weird discoveries and how they were handled. But one must agree with Schaefer that a sport where you’re main objective is to beat the other guy up, random testing for cheating is needed and warranted.