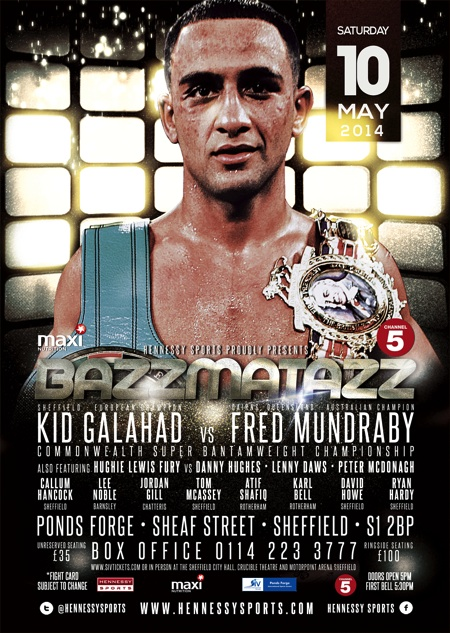 “Mundraby is a game opponent and he’s coming to win, but it doesn’t matter what he does it’s not going to be enough to beat me,” Galahad said.

The 24-year-old undefeated champion, Galahad, claimed the European crown by recording the 16th win of his unblemished record, that includes eight knockouts, with a 12 round masterclass over former Spanish champion Sergio Prado.

The Ingle trained star, Galahad, who is also an unbeaten former British and WBC International champion, will have to be on form when he faces ‘The General’ Mundraby.

The 26-year-old Australian is their national super bantamweight champion and boasts an impressive 15 wins with seven knockouts.

Fighting out of Cairns, Queensland, Mundraby fights in the UK for the first time in his career and is focussed on defeating Galahad and claiming the title.

“It will be an awesome feeling to have another belt to add to my collection,” Mundraby said.

“Also, it’s another step closer to a World Title fight – I will make my people proud and honouring God.”

However, Galahad, who has won four of his last five contests by knockout, is adamant he isn’t overlooking his latest opponent and is unwavering in his preparations.

“I’m not looking past this kid, I know he will be coming with a game-plan and he’ll be confident, but when I enter that ring I know what I need to do and I know I can push myself to do whatever it takes to win,” Galahad said.

“I want to win this belt for everyone that comes and supports me, it means everything to me and I appreciate all of them.

“This is another belt for my collection and it’s another step to where I want to be and that’s in the big fights at world level.”

The newly crowned European super bantamweight champion, Galahad, is chasing a world title and is out to show why domestic rival and WBA champion Scott Quigg will want “no part” of him.

“I’m going to show exactly why Carl Frampton vacated his European title rather than fight me and why Quigg and his promoter daren’t even mention me in the same sentence, me personally I know they want no part of me.”