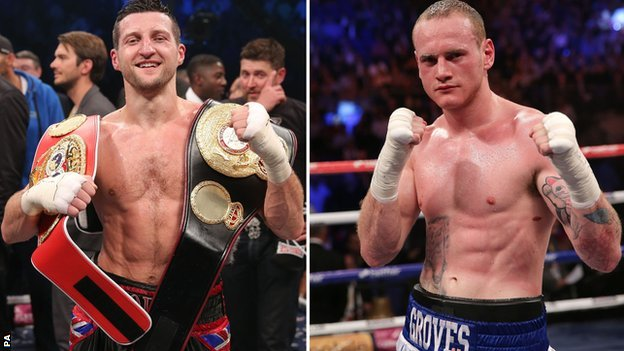 Carl Froch and George Groves will come face-to-face again as the bitter rivals meet on Ringside on Thursday May 1 on Sky Sports.
The Super Middleweight stars clash once more for Froch’s IBF and WBA belts on May 31 at Wembley Stadium connected by EE live on Sky Sports Box Office in association with Betway, and they renew hostilities in the Sky Sports studios next Thursday ahead of their hotly anticipated rematch.
The Brit adversaries stoked the fires for their first fight in Manchester with a tense meeting on the Ringside set before the November classic in Manchester, and the atmosphere when they sit side-by-side is certain to be electric as Johnny Nelson and Adam Smith take them through the first fight and look forward to the showdown at the national stadium that has already broken post-war British boxing attendance records.
“Last year, they met on an eerie Halloween, this time it’s May Day and in front of an audience on set,” said Sky Sports’ Adam Smith. “The tickets are as sought after as the fight itself! The tension will be phenomenal, the mind games gripping and I cannot wait to be inches from them – as we get up close and personal with these two fascinating fighters.”
“We all remember that epic Ringside edition last time these two met at the Sky studios and this time the stakes are even higher,” said promoter Eddie Hearn. “As we move closer to May 31 the inevitable physiological warfare will be compelling viewing – sit back and enjoy the ride!”
Tweet