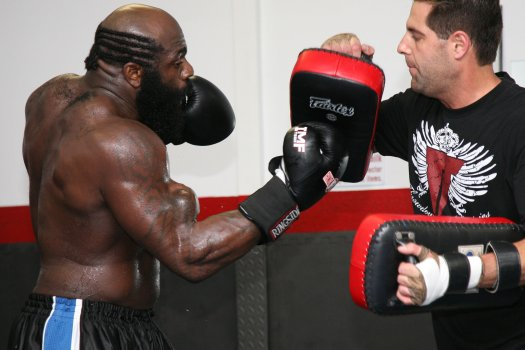 January 18, 2013 – Gary Shaw Productions, in association with Grange Old School Boxing and Black Venom Promotions, are pleased to announce a heavyweight showdown on the undercard to the Mundine vs. Geale world title fight at the Sydney Entertainment Centre, on Wednesday, January 30.

Cult sensation Kimbo Slice, will put his devastating punching power to the ultimate test when he squares off with QLD Heavyweight champion Shane Tilyard.

Kimbo Slice is no stranger to knocking people out.  He’s known around the world for his brute strength and granite chin as well as his amazing punching power.  One thing you can count on, Kimbo Slice is coming to fight!

“Tilyard thinks he’s been in the ring with tough guys but he’s never been in there with a monster like me,” stated Kimbo Slice. “He better be ready because I’m coming to knock his head off and show the fans of Australia who the real KO King is.”

The 27 year-old from Brisbane is a knock-out specialist, setting the scene for what is certain to be one of the most explosive heavyweight bouts ever seen on Australian shores.

All six of Tilyard’s professional wins have come by way of knock out, including a stunning demolition of former Australian Heavyweight champion Colin Wilson last year.

“I’ve been training the house down since I heard about this competition and I’m delighted to be given the opportunity to show Kimbo a thing or two about fighters in Australia”.  Tilyard said.

“Kimbo has a big reputation, but he has never fought anyone in a backyard, Octagon or boxing ring that has my power.”

“I’ve seen his clips on You Tube and I can tell you there will be another one very soon of me putting Kimbo on his backside once and for all”.

Today’s announcement rounds out a blockbuster card that will feature some of the most exciting prospects in Australian boxing.

Undefeated cruiserweight David Aloua will square off with Newcastle’s Daniel Aman for the Australian Cruiserweight Title.

Unbeaten contender, Joel Brunker will look to continue his rapid rise up the Featherweight rankings when he takes on Mexican Joksan Hernandez.

Former world title contender Jamie Pittman looks set for an epic showdown with Zak Awad, Cowra’s Steve Lovett will do battle with Joel Casey in a light heavyweight contest while Lauryn Eagle will round out the card when she takes on Nadine Browne.

Daniel Geale, Kimbo Slice and Joel Brunker are all promoted by Gary Shaw and are guaranteed to bring the fans to their feet with their electrifying  styles.