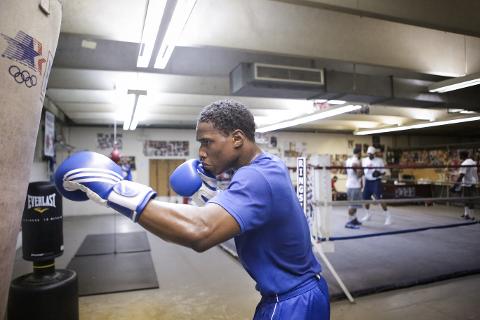 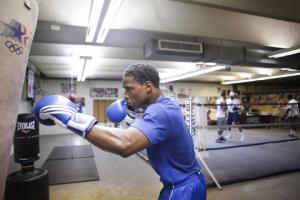 After aligning with boxing powerhouse Al Haymon and coming fresh off his first round knockout victory over Rick Morias. Undefeated 19 year old up and coming boxing star Kyrone “Shut it down” Davis spoke exclusively with thaboxingvoice.com‘s Nestor Gibbs to discuss his career and future with Al Haymon.
Love him or hate him, Al Haymon is known for being associated with the majority of the best fighters in the world. His eye for talent in that regard is very hard to question. So it’s a very positive sign when your working with him having only a 5-0 record. But in my opinion, that’s only part of what makes this guy someone to keep your eye on.
When asked how he was able to hook up with Haymon so early in his career. He cites his impressive amateur background which saw him in 100 fights, with 91 wins, and 3 national championships, coupled with the fact that Haymon has been picking up certain fighters he feels will one day be championship level as the most probable reasons for team Haymon reaching out.
Standing at 5’10” and currently campaigning at middleweight, Davis is considered by some to be a smaller guy for the weight class. So when asked if he is considering the possibility of fighting in a lower weight class and exploring that option during this developmental phase of his career  ( As Nes correctly states when asking the question, the first 10-15 fights of a boxers career mean a lot going toward their future development. They often help gauge crucial things such as which weight class a fighter is best suited to fight at among many other essential nuances that assist fighters at being at their best. ) He gave an answer that I particularly liked when he said “People say I’m a small 160 pounder, I feel like as long as I keep getting these knockouts this is the weight class for me.” He goes on to say, “I don’t struggle to make weight, I actually make weight really comfortably and feel my best at 160. 160 is where I want to be and I want to be middleweight champion of the world. I want to unify all the belts.” That’s an attitude I personally appreciate and love to see in the sport.
In addition to working with Haymon, Davis is also currently working with some very experienced people in his corner. Including some key members from former IBF Welterweight Champion Shawn Porter’s camp. When asked about this his answer was: “When I turned pro, I said I’m going to put myself in the best position to make it. So we reached out to the guys and made sure we had a team that could succeed.” He went on to say “I feel like my team is strong enough to make it to the top and with that kind of support system there’s no way I can lose.” I have a lot of respect for that kind of hunger and vision. With all of that coupled with some very heavy hands and an exciting fight style Davis is definitely a fighter to watch. Follow him on twitter and instagram both @KyShutItDown and make sure you check out the full interview and find out why this kid is a fighter to watch.
Tweet