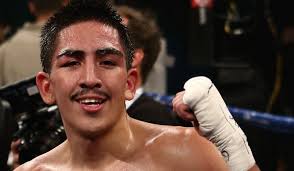 The Bermane Stiverne-Deontay Wilder bout was announced on Showtime this past weekend to take place on January 17th in Las Vegas at the MGM Grand, according to a report by ESPN Deportes, Leo Santa Cruz will also appear on the card as the co-feature in the bout.

Santa Cruz will defend his 122 pound belt but no opponents have been mentioned as of yet.

Santa Cruz is 28-0-1 with 16 knockouts and will be fighting for the first time since September. 2103 was a slow one for Santa Cruz only fighting twice. Santa Cruz would like to be more active and has mentioned fighting the likes of Scott Quigg, Carl Frampton, and a possible showdown with Abner Mares at 126 lbs.

Mares himself has said he wants the fight but he wants to avenge his loss to Jhonny Gonzalez. Santa Cruz was on hand to see Mares win in exciting fashion this past weekend in Las Vegas. Both are promoted by Oscar De La Hoya’s Golden Boy who said he would like to match the two up in 2015.