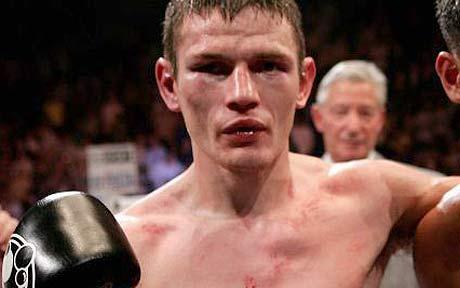 Willie Limond says he must beat Curtis Woodhouse when they clash for the British and Commonwealth Light Welterweight titles at the Braehead Arena in Glasgow on Friday June 27 live on Sky Sports – otherwise it could be the end of the road.

Limond defends his Commonwealth crown for the second time against Woodhouse having claimed the title last January and retaining it last June, while Woodhouse makes the first defence of the British belt he won in fantastic style against Darren Hamilton in Hull in February.

The Glasgow man enters his 42nd contest and having turned 35 in February, he concedes that any setbacks in his career now could spell the end of his 15 year association with the sport.

“I can’t afford any slip-ups, there is no margin for error,” said Limond. “I like to put myself under a bit of pressure because I feel I respond better and I have done that. I am 35 and I know my time in boxing now, I need to take it one fight at a time. I know if this doesn’t go my way it could be the end of it and I don’t feel ready to retire yet, I want to keep this going.

Limond has a score to settle with the coveted Lonsdale belt having twice fought for it in the past and falling short, first for the Super Featherweight version against fellow Scot Alex Arthur in 2003 then against Anthony Crolla for the Lightweight title in 2011.

Woodhouse was tempted out of retirement to travel to Glasgow to add the Commonwealth title to his British strap and take a step closer to outright ownership of the Lonsdale belt, and Limond is expecting a great battle against the former footballer with plenty at stake for both men.

“I would love to be a two-belt champion and hold the British and the Commonwealth titles at the same time,” said Limond. “The British title on its own is a prestigious belt but to have the Commonwealth as well as the British, well there are a lot better fighters than me who have never done that. I would be delighted if I could achieve that.

“I have fought guys who are 11st 5lbs. I know I am not a small Light Welterweight, I am pretty big and I work hard to do the weight. It won’t make a difference to be honest. My skill is my speed and my timing is superb, so I believe that will come into the equation more than who is going to be bigger than who.

“I saw his fight with Darren Hamilton. Curtis found an extra gear which I didn’t think he had, an extra level which I didn’t think he had, so I take my hat off to him for that. I have always admired Curtis and the way he goes about his business. He has come in on the back of being a good, solid professional football player and he was written off early door. But he has achieved a British title, something I am yet to do. I have to take my hat off to him.

“I do rate him as a fighter. I think the win against Darren Hamilton was a very close fight. I didn’t think Hamilton was at his best that night but Curtis did brilliantly to win it, fair play to him.

“I have fought all over and it is good to fight in your home city. Different people can react differently to that. Curtis seems to have a strong mentality so I don’t think the crowd will affect him. It is always good to have the crowd behind you but it doesn’t make much difference to the fight.”

Limond’s clash with Woodhouse is part of a huge night of boxing in Glasgow as Ricky Burns is gunning for a return to winning ways against the unbeaten Montenegrin Dejan Zlaticanin for the WBC International Lightweight title and as an official eliminator for the World title.