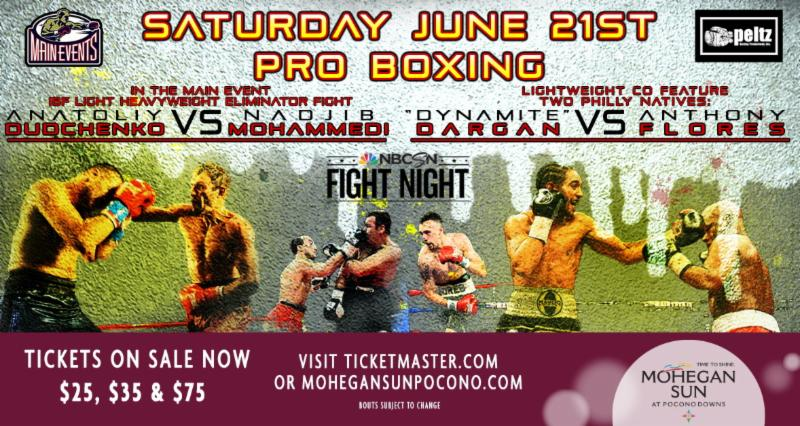 Wilkes-Barre, PA: NBCSN Fight Night will showcase the IBF Eliminator between Anatoliy “The Gladiator” Dudchenko and Nadjib Mohammedi for the #1 position in the IBF light heavyweight ratings this Saturday, June 21 at 8 p.m. ET. The winner will be awarded the chance to challenge IBF and WBA Light Heavyweight Champion Bernard Hopkins for his IBF title.
NBC Sports Group’s Fight Night broadcast team of play-by-play announcer Kenny Rice, analyst B.J. Flores and reporter Chris Mannix call the action.
Leading off the Fight Night telecast, will be an all-Philly showdown between Karl “Dynamite” Dargan and Anthony Flores for the USBA Atlantic Coast Region Lightweight Title.
Originally from the Ukraine, Anatoliy “The Gladiator” Dudchenko now resides in Los Angeles, CA and has reunited with legendary trainer Jesse Reid for his first fight since signing with Main Events. Dudchenko, 35, has an impressive 68% (13 of 19) knockout-to-win ratio. He has also won 16 straight decisions, 10 by stoppage, dating to 2008. Anatoliy is coming off a 12-round unanimous decision victory over Robert Woge in Germany on October 26, 2013 for the IBF Inter-Continental Light Heavyweight Title. “The Gladiator” is excited to make his NBCSN Fight Night debut, “Fighting on television in America is everything I’ve wanted when I started boxing. I watched Roy Jones on TV and that is what I wanted to be. I was in TV in Europe, but this is a bigger audience in America and I am excited to be fighting on Fight Night.”
Nadjib Mohammedi, 29, is from Gardanne, Bouches-du-Rhône, France, and makes his U.S. Fight Night debut on June 21. Mohammedi has an impressive knockout-to-win ratio at 58% (20 of 34). He has registered 10 consecutive victories dating to 2011, with eight by knockout. Nadjib’s most recent victory was a sixth round KO of Oleksandr Cherviak on November 30, 2013 for the WBA Continental Light Heavyweight Title. Mohammedi said only one thing about this fight, “Only one trajectory, the victory.”
In the co-feature, Karl “Dynamite” Dargan will defend his USBA Atlantic Coast Region Lightweight Title against Anthony Flores. The undefeated Dargan won his title on November 16, 2013 against Mike Brooks in a 10-round unanimous decision victory on the Special Edition of Fight Night broadcast on NBC live from Turning Stone Resort and Casino in Verona, NY. After that, he defeated Chazz McDowell on the undercard of the sold-out Adamek-Glazkov Fight Night show at the Sands Casino Resort on March 15. “This is bigger than a fight for Philly bragging rights,” Dargan said. “I am not looking passed him but I am playing passed him. I respect anyone who has the heart to step into that ring with me and all I can do is look forward to the future.”
Dargan’s opponent will also be making his Fight Night debut on June 21. Anthony Flores is coming off a stunning upset victory over then-undefeated Mike Faragon on April 4 in a six-round unanimous decision win in Parsippany, NJ. Flores has two consecutive wins this year but this will be the first 10-round fight of his career. Flores is excited to make his Fight Night debut, “It’s exciting to fight on NBCSN. People are always saying they want to see me fight. They have no excuses now, they just have to turn on the TV and watch me. I am really grateful for this opportunity.”
“We are excited to have more top boxers making their debuts in big bouts on Fight Night,” said Gary Quinn, vice president of programming & planning for the NBC Sports Group.

Kathy Duva, CEO of Main Events, said, “Both of these Fight Night bouts are important and will be all-action. Three out of four of these fighters are making their Fight Night debut and also their debut on national television in the US, so it’s a great chance to see them in action before the winners move onto bigger fights.”
Tweet