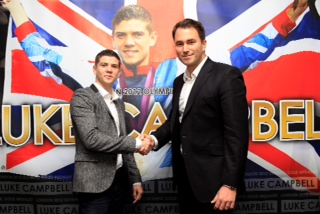 Luke Campbell MBE will make his professional debut in a huge outdoor show in his hometown of Hull in July, live on Sky Sports.

The London Olympic gold medallist was unveiled as the latest signing to Eddie Hearn’s Matchroom Sport stable on Tuesday and he has vowed to use his Olympic success as a stepping stone for greatness in the paid ranks.

“I am overwhelmed to be a part of the Matchroom stable,” said Campbell. “I am very excited about our journey together and where we can go. I have been an amateur boxer boxing for Great Britain for the last 13 years, and I have won medals at every major elite tournament.

“The experiences boxing around the world, in Russia, Germany, everywhere I have boxed against tough, hard opponents, all of them were learning curves for me for this real game which is the professional ranks.

“I think I learnt a lot from the Olympic experience. It was the first time going out there where you had so much pressure on your shoulders, boxing for 10,000 people who were there for you and cheering for you.

“I use the fans for my benefit; every time they cheered that raised my game a little bit. To handle that type of pressure, especially in your own country, was tough but I went out there, I enjoyed it and learnt a lot from it. Experiences like that will help me in my pro career.

“Whether my debut is at the KC Stadium or at Craven Park I think the fans will bring an electric atmosphere and is going to be a night to remember.

“It has never been done before for a professional debut so it is a chance for the city and fans to make history and worldwide news and do a massive outdoor event for somebody’s pro debut. I am excited, I am training hard and I will put on the best show possible in the ring.”

Campbell will headline the show with the venue and date to be confirmed soon by promoter Eddie Hearn who revealed that Tommy Coyle will take on Derry Mathews for the vacant Commonwealth lightweight title on the bill.

“This is a huge day not only for Luke Campbell but for British boxing. We have someone in Luke that can penetrate fresh audiences and breathe new life into the sport.

“Luke is a tremendous young fighter and the perfect role model with a backing in his home city like I have never seen. The journey will begin via a huge outdoor event in Hull in early July and fans will be able to watch Luke at Matchroom shows all over the country and of course live on Sky Sports as he learns his trade in the professional game.”

Campbell and Hearn will once again address the media at a public press conference at the Hull City Hall tomorrow from 2pm.