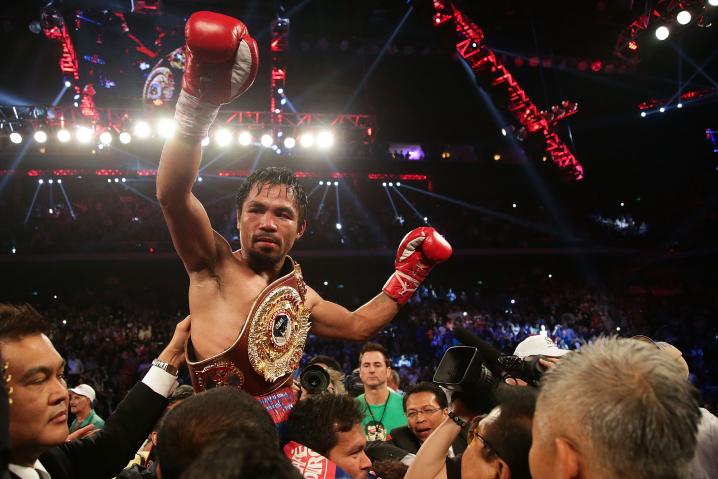 In the highly anticipated rematch of their controversial 2012 bout, Manny Pacquiao (56-5-2, 36 knockouts) took on Timothy Bradley (31-1, 12 knockouts) in a bout that would eliminate doubt as to who really is the better fighter between the two men. With both fighters coming off dominant victories within recent months, and another couple of months of promotional build-up, fans and media seemed convinced that Bradley was just going to put a(n) exclamation on the point he already established with his victory over Pacquiao in 2012. After all, the knockout at the hands of Marquez was still a fresh image in people’s minds, and many (both fans and media alike) were quick to throw Pacquiao into the damaged goods aisle. In the end, Pacquiao taught fans a lesson, and it was one that was already known: He is still a force in the welterweight division, and he is far from being done.

In the opening moments of the bout, both fighters wasted no time in finishing where both left off in their first meeting. Pacquiao came out aggressive while Bradley came out in his calculated approach which emphasizes technique over aggression. It was Bradley’s boxing that kept the bout rather even early in the fight. With Pacquiao coming forward with a quick volley of shots, Bradley relied on head movement, footwork, and body shots to score points and damage the still quick Pacquiao.

Although even on the scorecards, Bradley looked comfortable in the ring with Pacquiao and this had many ringside believe that this confidence and controlled aggression is what would carry him to a victory of the the Filipino icon. This was an idea that was only further added to after Bradley seemed to successfully stagger Pacquiao in the fourth round with a winging overhand right. Pacquiao shook the blow off and recovered well, but Bradley suddenly became obsessed with chasing the knockout.

After successfully landing the power punch and briefly staggering Pacquiao, Timothy Bradley went into headhunter mode in hopes of knocking out the man he feels he rightfully beat in their first meeting. Unfortunately, this abandonment of the original gameplan and increased recklessness provided Pacquiao all he needed to seize the reigns of momentum from his cocky opponent.  Pacquiao weaved in and out of Bradley’s range, throwing quick flurries of combinations to the head and body that a tfirst didn’t affect the champion, but as time wore on they began to take their toll.

Round after round passed, and Bradley was still seeing red. Much like in his bout with Provodnikov, Bradley would find himself in violent exchanges that would see him endure some hellacious blows all in an effort to land that one knockout punch. That opportunity never came, and along with some poor advice from his own corner, Bradley played right into Pacquiao’s strengths. The bout went from an even contest to one that seemed like a boxing clinic, making it all the more odd considering that Bradley is the much more technical fighter. Still, Pacquiao managed to capitalize on a mental lapse of his opponent and was awarded a victory thanks to his efforts.

Judges ring-side scored the bout all in favor of Pacquiao on scores of (116-112), (116-112), and (118-110). With the win, Pacquiao has rid himself of one of the unavenged losses on his record, but there is no telling where he may go next. Sure, there is always the option of a rematch with Marquez (should he get past Mike Alvarado in May) and maybe even a rematch with Bradley, but with a win like this the talk of a Mayweather super-fight is bound to flood the airwaves again. Regardless of who he manages to fight next, Pacquiao has proved to everyone that he is a fighter whose legacy was already sealed long ago but still being built upon.