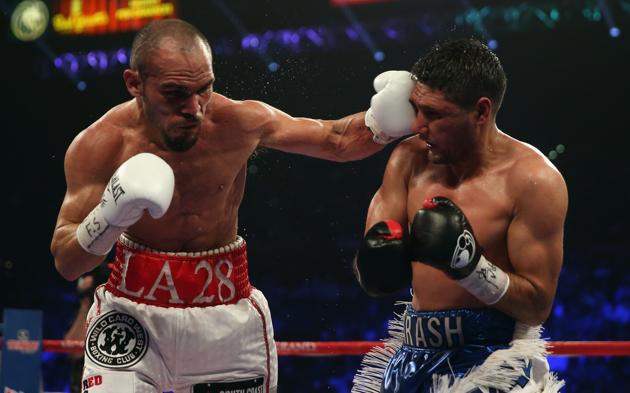 In the co-main event of the Pacquiao vs. Bradley II pay-per-view, Ray Beltran (29-6-1, 17 knockouts) took on late replacement opponent Arash Usmanee (20-2-1, 10 knockouts) in a lightweight bout. Originally slated to face Rocky Martinez, Beltran has to settle for Usmanee thanks to a last minute injury suffered by Martinez when preparing for the bout. Although Usmanee was a bloated junior lightweight who decided he would pursue the pay day, Beltran approached the fight in his typical focused manner knowing that a victory could mean another shot at a major title.

From the opening bell all the way to the end of the fight, Beltran was the aggressor. In typical fashion, Beltran came at his opponent with the pressure heavy style that saw batter the both heady and body of his short-notice opponent. To his credit, Usmanee managed to stay in the fight all the way through, but not matter how hard he tried it was clear that Beltran was too much for such short notice.

Beltran continued to outpunch opponent as well as simply walking through any of the power punches thrown by Usmanee, and this ultimately led to the decision being awarded to Beltran over a wide margin. The win earned Beltran a shot at highly touted lightweight boxer Terence Crawford, and thus could potentially be Beltran’s second shot at competing for a major title.