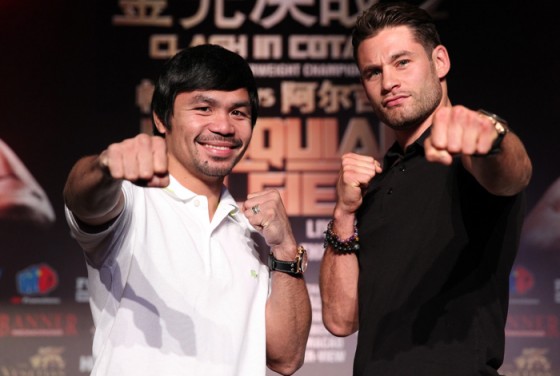 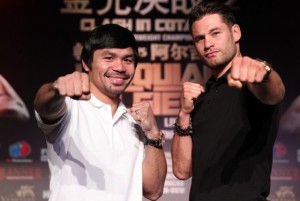 Manny Pacquiao (56-5, 38 KOs) was once seen as an unstoppable force in the sport of boxing, by becoming the first and only fighter to win titles in eight different divisions. It was not until his devastating knockout loss against Marquez, that signs of vulnerability began to emerge. Despite having two great consecutive wins against Brandon Rios, and Timothy Bradley, his aura of dominance hasn’t been the same.

Chris Algieri (20-0, 8 KOs) believes its now his time to establish himself as a dominant figure in the sport of boxing. He once shocked the world in defeating Ruslan Provodkinov, and he plans to do it again in Macau, China on November 22. A win for Algieri will certainly give him fighter of the year honors, and make him an overnight sensation.

Manny Pacquiao will enter the ring standing at 5’6½” with a 67-inch reach. He will be at a size disadvantage against Chris Algieri who stands at 5’10″ with a reach of 72 inches. This will be a huge factor given the fact Algieri plans to fight going backwards the entire time. Pacquiao will have to find a way to negate Algieri’s size advantage and land his own punches without receiving fire from the outside.

Ever since Pacquiao fought Brandon Rios in Macau, China his knockout power has diminished. Despite no longer being a devastating puncher, he still has enough power to stun some opponents with combination punching. Pacquiao will probably not be able to really hurt Algieri at any point of the fight, because he has proven to have a good chin. Algieri’s constant footwork should also negate him from taking heavy fire as opposed to opponents who just stand in front of Pacquiao.

Algieri is not a power puncher, but has enough to be a nuisance to his opponents. Pacquiao’s good chin should be able to keep him steady on his feet, without ever being in danger of possibly being knocked down or knocked out in the fight.

Pacquiao is a great combination puncher. Since he still retains his tremendous hand speed, it is difficult for opponents to react, and effectively block all of the punches he throws. His combination punching usually ranges from 2 to 5 punches. Despite this, Pacquiao will still find it difficult to land a multitude of shots in the fight, since Algieri will always be constantly moving. Pacquiao can still land punches but many of them will not be too effective.

Pacquiao’s offense will be optimized when Algieri remains stationary, because Algieri has the tendency to sneak in punches on the inside and slip away. At times Algieri stays within distance for a second too long, and Pacquiao can catch him in the middle of an exchange. This is where the tide of a round can flip towards Pacquiao’s favor.

Also, due to Pacquiao’s explosive spurts, he may not have to land a lot of effective punches to win rounds. Pacquiao can possibly steal rounds just by creating anxiety in Algieri whenever he’s in range to throw a combination, thus giving the judges a better impression of who is in control of the fight.

Algieri works at a consistent pace. He likes to pump the jab, throw straight rights, and even land a couple of punches on the inside before slipping away. Algieri’s size advantage should allow him to tag Pacquiao multiple times from a safe range on the outside. This is Algieri’s greatest physical asset leading into the fight, and given the fact Pacquiao doesn’t necessarily close the distance between him and his opponents, he prefers to stay midrange then have multiple spurts, Algieri should have a lot of success in a couple of rounds.

The only issue with Algieri is, he’s not a great counterpuncher. He prefers to get off first, and then slip away. Algieri will not be able to make Pacquiao pay for his defensive miscues when lunging in as much as he should, thus making the bout much more competitive.

Pacquiao is not the worse defensive fighter, but possesses a lot of flaws. The only reason why he has been able to get away with defensive miscues, is due to his combination of speed and power intimidating his opponents. Since Pacquiao has lost a good portion of his power, fighters are now willing to take more risks, and expose Pacquiao’s defensive lapses.

The mistakes Pacquiao continues to commit is he sometimes remains stationary with his high guard inviting his opponent’s to hit him before stepping back. He also throws his jab with his left hand down to his chest, which makes him very susceptible to counters. He can also be a bit repetitive at times, thus allowing his opponents to time him, and Pacquiao likes to get into wild exchanges with his hands low.

People have a misconception that  Pacquaio has greatly improved after his knockout loss against Marquez, but the reality is he might not have. When looking back at Pacquiao’s most recent fights, it’s hard to assume he would have done better than his former self when he first began jumping up in weight classes.

A younger Pacquaio would have probably caused more damaged to Brandon Rios, and dominated Bradley in a much more emphatic fashion.

Yes he defeated Bradley in their rematch, but he did got caught with a lot of wide hooks despite being more patient. If he was in the ring with a greater power puncher, Pacquiao might have been in a lot of trouble. Also when Bradley decided to box in the 11th round instead of brawling in their rematch, Bradley clearly won the round.

The more Pacquiao has to rely on his skills instead of talent, the more trouble he is going to be in as his career progresses.

Yes Pacquiao does showcase good head movement, and great footwork at certain times in the fight, but it’s not enough to counteract the defensive lapses he still exhibits.

Algieri is a good defensive fighter. It is very difficult to land multiple clean punches on Algieri because he utilizes his legs, has good head movement, always has his hands up, and knows how to smother his opponent’s punches.

The great thing Algieri has going for him, is he knows his identity. He knows he has a height and reach advantage over the majority of the fighters he will face, so he stands tall and constantly moves and uses his reach. Wladimir Klitschko is a great example of a fighter knowing what his identity is because he always stands tall, and utilizes his jab. There are some fighters who don’t know how to use their gifts to the best of their ability such as Willie Nelson, the 6’3 light middleweight. Nelson at times gets into unnecessary exchanges on the inside, and leaves himself in very vulnerable moments in the fight. Algieri has learned to stray away from the same tendencies Nelson currently struggles with.

Tim Lane, Algieri’s trainer, constantly explained to the media Algieri’s biggest improvement was his ability to become a boxer, and resisting the urge of getting into unnecessary exchanges. This is what helped Algieri to defeat Provodkinov, despite having a difficult first round. Algieri does a great job of following the game plan even through adversity, and realizing what his true identity is.

The style of each fighter should cause a lot of problems for one another. Algieri’s good defensive skills, along with his reach and constant movement, should prevent Pacquiao from landing multiple combinations. Pacquiao will be able to land some punches, but will show signs of frustration during the fight.

Algieri will be peppering him with jabs and straight rights from the outside, which will win him some rounds. Despite this, Algieri’s offense may not be good enough to convince the judges he’s winning every round, when Pacquiao has his moments in spurts. Even if Pacquiao doesn’t land a lot of effective punches, if he can make Algieri uncomfortable and the crowd erupts, rounds may go into Pacquiao’s favor.

Pacquiao will also take advantage of Algieri’s tendencies of trying to sneak in short shots on the inside, and jump on Algieri at the right moments.

In this fight, Pacquaio should be the winner. Pacquiao is very sharp, contains a lot of speed, and Algieri is not the type of opponent who will make him pay dearly for his mistakes due to his lack of power. Even though Pacquaio should win, Algieri’s performance in this fight will catch a lot of attention from fight fans. This bout will be competitive, and it would not be a shock at all if Algieri wins in some people’s eyes, but in order to get a decision over Pacquiao in Macau, China, one needs to really dominate, which makes it very difficult to get the decision.

Either way, Algieri’s stock should rise after this fight.