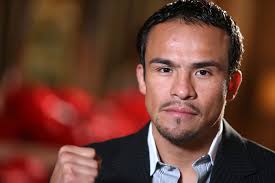 Juan Manuel Marquez has been adamant as to wanting the Floyd Mayweather-Manny Pacquiao fight. He has addressed the topic twice on the ESPN show Golpes a Golpes in the last two weeks. Like most of us he’s seen the social media back and forth between Mayweather and Pacquiao or should we say their publicity team.

Mayweather posted on his Instagram page a video of Juan Manuel Marquez dropping then knocking out Pacquiao in their fight two years ago today. Marquez feels like the back and forth shots should stop and the two should get in the ring to settle it.

“Floyd should stop posting videos and photos of me knocking out Manny,” Marquez said. “He should fight him first, prove he is the best not just talk but beat the man considered the best pound-for-pound [fighter] for years, Manny Pacquiao.”

Marquez was adamant in picking Mayweather to beat Pacquiao but there are many people who believe Mayweather doesn’t want to risk his 0 to get into the ring with Pacquiao unless he controls all the aspects of the negotiations. Marquez just wants Mayweather to fight Pacquiao and then if he beats Pacquiao, Marquez says, “Then he can post whatever he wants.”