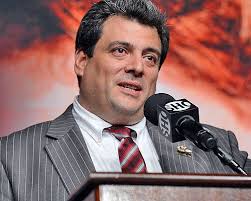 The WBC head honcho made quite a statement this week in regards to the sport he sanctions. Mauricio Sulaiman took over the World Boxing Council once his father Jose, long time head of the organization passed this year.

Sulaiman was asked if he could wave his wand and change the sport of boxing what would he do. He stated, “One champion per division recognized as the WORLD CHAMPION. Then all organization can have their own champions, but not called WORLD CHAMPIONS.”

In hindsight it would make sense but what would we call the 4 alphabet organization’s belts? And what would be the recognized world champion? Would it be like a UFC belt? Long has the Ring Magazine belt been considered the title in the sport but that has changed plenty since the magazine was purchased by promoter Golden Boy Promotions. So it was to no surprise when guys like Robert Guerrero, Adrien Broner, and Canelo Alvarez were ranked in their top 10 pound for pound.

Mauricio says he wants to change the sport of boxing.

“Today many promotions are already making money without selling one ticket while other promoters lose too much money if they don’t sell tickets,” explained Sulaiman. “Fighters are inclined to becoming “TV network fighters” and are happy fighting twice a year. Great fights are not being made because promoters, TV networks, sponsors and others are fighting each other; egos get in the way. There are too many mismatches, especially at the lower levels, as managers and promoters make convenient matches for their fighters. Fighters are not finishing the natural cycle and are brought up too soon, so they are burnt out and gone.”

Again I agree with his statement. But there have been plenty of criticisms with the organization behind the green belt especially when it comes to bogus rankings and favoring certain fighters to get them in position to win a title for the almighty fee. Just recently the WBC let Floyd Mayweather defend his 147 and 154 lb. title eliminating any chance for Mayweather to face any mandatory as per their rules and allowing him to keep both belts, even as it seems Mayweather has no intention of ever fighting at 154 again.

This same organization made Julio Cesar Chavez its number 1 ranked 168 lb. fighter even though his only significant victory in that division was against Bryan Vera. It was the same organization that sanctioned Canelo Alvarez vs. Matthew Hatton for its 154 lb. green strap. The green belt is held in high regards by many fighters and the organization should act upon the respect the fighters give it in reciprocation.

Maybe Sulaiman is turning over a new leaf? Still it’s puzzling to know why Amir Khan is their number one ranked welterweight. Maybe because he’s the front runner to land a Mayweather fight next year? Beating a Luis Collazo really doesn’t justify the ranking.

They’re a lot of ills in boxing and I’m glad the WBC President is recognizing some. But will he act on those and clean up his own house. That remains to be seen.