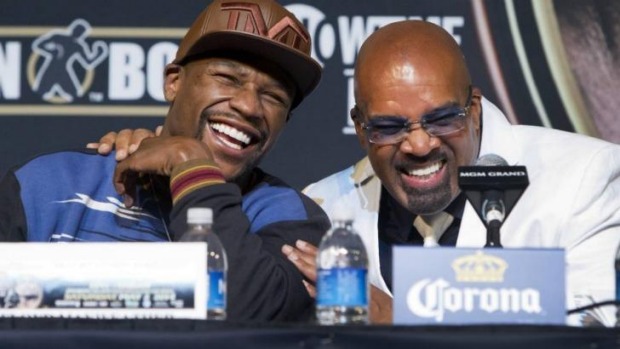 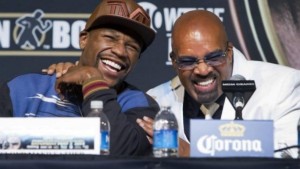 Floyd Mayweather Jr. wore his promoter hat well yesterday at the open workouts for the PBC on NBC. One fighter making headway and could be one of boxing’s biggest stars is Errol Spence.

Although his opponent is still up in the air for Saturday, the plan is to get him on the telecast. Mayweather joked with the young fighter.

“He should get that Mayweather Promotions patch on your trunks,” Mayweather said, as almost to say, ‘you should sign with my promotional company.’

“He (Errol Spence) doesn’t really say too much, but he do a lot though in that ring,” Mayweather told ThaBoxingVoice.com.”

When asked about the event that took place in May between himself and Manny Pacquiao and the backlash being received for the lack of action, Mayweather was candid.

“I can deal with the scrutiny and the backlash, I’m Mayweather.”

But he did slay the ‘dragon’ in Manny Pacquiao even if he may not get the full credit because of the timing of the fight and the Pacquiao injury.

“I thought I was the dragon,” Mayweather laughed. “I’m the dragon slayer. He’s (Manny Pacquiao) a solid competitor; you know he’s a good fighter.”

With PBC on NBC and his relationship with Al Haymon, you can expect many of the Las Vegas cards to be under the Mayweather Promotions banner.

While at the gym, Mayweather said that he’s in the business of building champions.