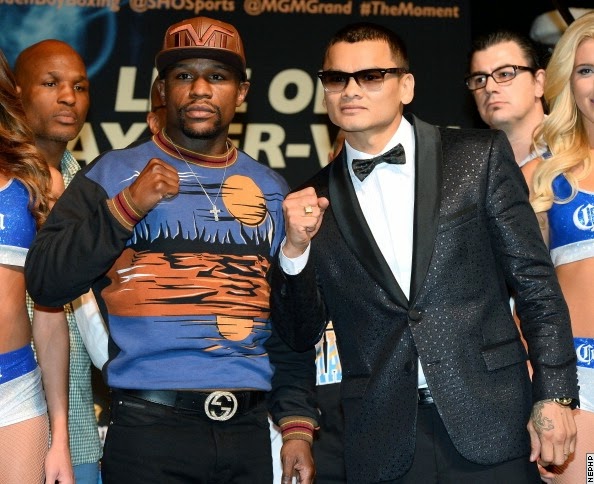 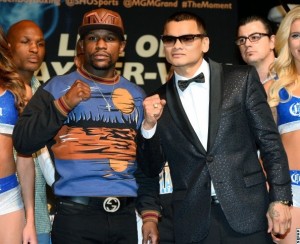 Centennial, Colo. – Aug. 5, 2014 –After a thrilling fight between 11-time world champion Floyd “Money” Mayweather and Marcos “El Chino” Maidana on May 3, 2014, Fathom Events and Mayweather Promotions are pleased to present the second bout between the two fighters on the big screen. This highly-anticipated event will be broadcast live on Saturday, September 13 from the MGM Grand Garden Arena in Las Vegas at 8:00 p.m. ET / 7:00 p.m. CT / 6:00 p.m. MT / 5:00 p.m. PT / 4:00 p.m. AK / 2:00 p.m. HI. “Mayhem: Mayweather vs. Maidana 2“ will undoubtedly test the skill and will of both warriors in this electrifying showdown that left both fighters with unfinished business in May, giving Maidana one more chance to claim victory against the undefeated champion.

Tickets for “Mayhem: Mayweather vs. Maidana 2” are available at participating theater box offices and online at www.FathomEvents.com. For a complete list of theater locations and prices, visit the Fathom Events website (theaters and participants are subject to change). The event will be broadcast to nearly 570 select movie theaters across the country through Fathom’s Digital Broadcast Network.

“I love that fans can go to the movie theaters to watch my fights. Our relationship with Fathom has been a good one thus far and it’s only getting stronger,” said Mayweather. “This is my first rematch in over a decade and I’m happy that we’re going to give fans the opportunity to see it live on the big screen.”

“I am so happy that this rematch is being shown on movie screens because when I hand Floyd his first loss, it should be larger than life,” said Marcos Maidana. “Our first fight was exciting, but this one is going to be even better and I hope fans are ready.”

The undefeated Floyd Mayweather, (46-0, 26 KOs), an 11-time world champion in five weight divisions, remains boxing’s biggest attraction, wowing crowds and generating record numbers each time he steps into the ring. During his extraordinary career, he has amassed wins over world champions such as Diego Corrales, Jose Luis Castillo, Arturo Gatti, Zab Judah, Oscar De La Hoya, Ricky Hatton, Juan Manuel Marquez, Shane Mosley, Miguel Cotto, Robert Guerrero and Canelo Alvarez. His May 3 fight against Marcos Maidana not only showed his willingness to go toe-to-toe with one of the hardest-hitting fighters in the sport, but it also revealed his determination and dedication to be known as ‘T.B.E’ (The Best Ever).

Marcos Maidana (35-4, 31 KOs), of Santa Fe, Argentina, captured the attention of boxing and sports fans around the world with his thorough beating of the highly regarded and then-undefeated Adrien Broner on Dec. 14, 2013. The 31-year-old impressively dominated Broner from the opening bell and registered two knockdowns against the three-time world champion. Maidana continued to impress the boxing world in May 2014 when he faced the pound-for-pound king Mayweather. Maidana came out blazing, pinning Mayweather against the ropes, throwing precisely 100 punches in the opening round. By the end of the fight, Maidana had thrown more punches against Mayweather than any opponent, leaving him hungry for another shot at the champion.

“We are pleased to continue to work with Fathom and provide the fans with this unbelievable viewing experience,” said Leonard Ellerbe, CEO of Mayweather Promotions. “If the first fight was any indication of what is to come between Floyd and Marcos, September 13 will be a fight night to remember, and I can’t think of a better way in which to see it happen live.”

“The May match-up between Floyd Mayweather and Marcus Maidana had all of us on the edge of our cinema seats as it was an “anything can happen” thrilling fight,” Fathom Events Senior Vice President Dan Diamond said. “Fathom Events is thrilled to bring this winner-take-all rematch to cinemas across the nation as boxing fans are sure to witness an epic battle they won’t soon forget.”