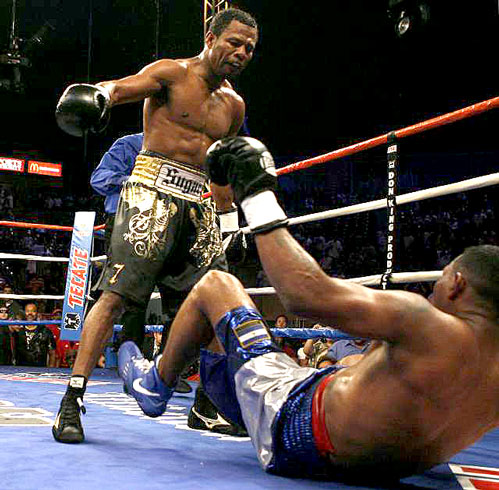 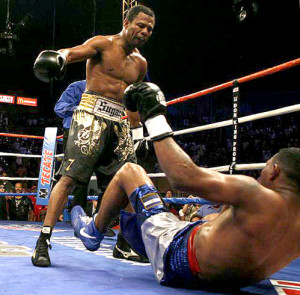 On September 27th, 2008 “Sugar” Shane Mosley and Ricardo “El Matador” Mayorga put on an entertaining fight with Mayorga. It was a give and take affair from both fighters but it would eventually end up being Mayorga who would get stopped with one second left in the final round.

After that fight Mayorga’s career would slowly spiral down while Mosley would go on to fight mainly top tier opponents and going 1-4-1 and eventually retiring.

Mosley’s last fight took place in 2013 when he suffered his first career stoppage against Anthony Mundine in Australia. Since the loss and retiring, Mosley has stayed in shape and with the help of his father Jack, guide his son Shane Mosley Jr. as a budding prospect in pro boxing and in BKB.

Mayorga fought Miguel Cotto in 2011 and was stopped in the last round. Inactivity and issues with his promoter Don King, squashed any attempts to revive his boxing career.

Instead, Mayorga turned to MMA in what was a disastrous move but hey, the guy has to get paid if his promoter is not doing his job.

Since retiring from MMA, Mayorga made a return to boxing in 2014 against lesser opponents and is 2-0 since returning.

Recently there have been rumors that have surfaced of a possible rematch between the two. Both fighters are old and over the hill and it’s safe to say well past their prime. I believe the fight is something that fans would rather not see, but the fighters will do as they please.

Mosley has had a great career and does not need the rematch, nor does he need to continue fighting.

If he was in a financial bind, I could see him returning to the ring. Mayoría has stated in the past that he fights only for the money, but he would also like to avenge the losses that he has had. If a rematch does happen it would be interesting to see if it takes place in the ring or in a BKB pit.