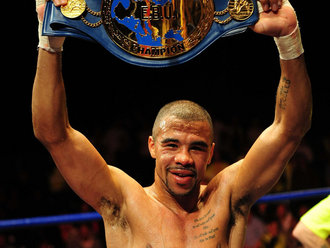 Rendall Munroe bids to become a two-weight European champion when he faces Lee Selby for the vacant Featherweight crown at the Motorpoint Arena in Cardiff on Saturday live on Sky Sports, and says he still has designs on World title glory.
Munroe hung the gloves up after defeat against Scott Quigg in their clash for the interim WBA Super Bantamweight title in November 2012. The Leicester man stayed away from the fight game for just four months though and was back in action in his hometown in May with a first round win.
The former WBC World title challenger added ten and six round points wins to his belt before the end of the year and now takes on the hotly-tipped star Selby.
“I don’t think I ever stopped being at my best,” said Munroe. “The issue for me was my weight, that was the thing letting me down – trying to make the weight all of the time. Sometimes it takes a bit of relaxation time to realise, and as my manager said to me recently, the best thing that happened was me retiring, getting my head clear and deciding what I wanted to do.
“I have shown the calibre of boxer I am and what type of character I am. I have said for a long time that I should have more than just the one World title shot that I had. There are others out there who get a few chances but I had one chance and everything went pair shaped for me after that.
“This is a step towards another World title fight. After I win this fight I will be a two-weight European champion. The talk at the minute is that Selby is ready to challenge for a World title, so after I beat him does that not say that I will be ready for a shot at the World title?
“If they are saying he is good enough to fight for a World title this year, and I go out there and beat him, then that is saying that I would be good enough. I had six European fights at Super Bantamweight and this is number seven for me. I don’t know what will happen on Saturday, if I will have a few defences of the European or get a World title shot straight away.
Selby has enjoyed a sparkling run of form since his stunning win over Stephen Smith to rip the British and Commonwealth titles from the Liverpool man on his home patch in December 2011. Impressive defences of one or both belts against John Simpson, Patrick Okine, Martin Lindsay and Corey McConnell were followed by a mature performance against unbeaten and well-ranked Romanian Viorel Simion for the WBC International crown.
A win over Ryan Walsh in November saw Selby claim the Lonsdale belt for keeps, but Munroe says he’s the first World class fighter the Welshman has faced.
“Selby is coming to win, and I am coming to win so this is his step to the next chapter that he wants,” said Munroe. “He will come very prepared and really up for it.
“He’s got nothing that worries me, nothing. I’m World class and I think I’ve proved that. As for him being bigger, I’ve been sparring bigger lads since day one. I always have to get sparring partners who are bigger than me anyway because I’m a strong lad at the weight myself.
“I’m not getting any younger but I’m good enough, strong enough and I’ve proved I belong at that elite level. This is my chance to show Rendall Munroe has gone up a weight and to still show I’m World class. By beating Lee Selby I’ll be European champion which will get me fights and put me back in the frame to fulfil my dream of becoming World champion.
“I didn’t think a shot at the European would come so soon after the comeback but when you get those opportunities you have to make use of them. I was English champion when I fought for the European title at Super Bantamweight. I took that opportunity and that made me into who I was. Now, I have a vast of experience behind me and I have the opportunity to do it all again. I’m still seeing the lights; I want the lights and I want the belts.”
Munroe’s clash with Selby tops a brilliant night of action in Cardiff, with a tasty all-Welsh British Lightweight title eliminator between Gavin Rees and Gary Buckland one of many highlights.
Olympic Gold medal hero Anthony Joshua MBE fights for the fourth time in the paid ranks against Aberdare’s Dorian Darch while Jason Cook meets Tony Pace for the Welsh Area Light Welterweight title.
Prizefighter Light Welterweight champion Chris Jenkins is in action as is former European Middleweight champion Kerry Hope, and Islington’s former British Light Middleweight title challenger Erick Ochieng faces a tough test in his first fight down at Welterweight against Dale Evans.
Swansea’s talented Super Middleweight Tobias Webb tackles Nathan King in a six-round contest, with Bristol’s unbeaten Welterweight Tamuka Mucha in his seventh pro fight.
Tweet