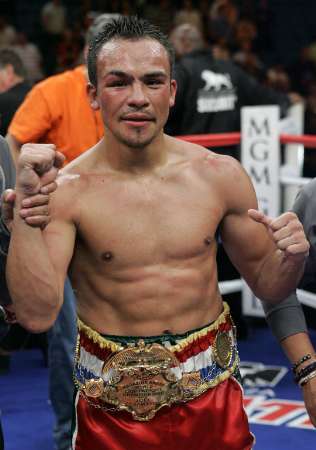 Not a very active week in boxing this week, but what we do have is a bunch of upcoming fights. So today I will focus in on boxing’s schedule and the boxers we will likely see in action in the future. First off who is Marquez finally gonna fight? Donaire and Rios on the same card for June 30th. We at Tha Boxing Voice would like to start a collection, for The Retirement of Roy Jones Jr. Is Kessler at light heavyweight, a danger of an Illusion.. All this and more on today’s Wire Report.

No word yet on who Juan Manuel”Dinamita” Marquez (54-6-1 39KO’S) will face in Mexico on July 21st. Marquez has been recently active, fighting in April and beating Serhiy Fedchencko by unanimous decision. Marquez upset with his inability to win in Las Vegas, NV, against Manny Pacquiao decided to no longer fight there. Now he fights in Mexico where he feels the judges will arrive to their outcomes with less bias. The two fighters that we may be seeing matched up against Dinamita are south paws Cesar Cuenca, and Mercito Gesta. Marquez has been eyeing southpaws lately to prepare for an inevitable fourth fight with PacMan. When asked if he’d like to fight Erik Morales, or Brandon Rios. Marquez expressed no interest in neither because they are not south paws. I think Marquez is obsessed with Pacman just like their respective fans. When I hang out with Mexicans or Filipinos I do not talk about Pacquiao-Marquez its just something I learned not to do. It’s like talking religion, or politics at your local bar.

Although it seems that HBO will pass on this next event, it does not mean it is not a worthwhile card. On June 30th we see the return of the WBO super bantamweight champ Nonito “The Filipino Flash” Donaire (28-1 18KO’s) will be facing IBF super bantamweight title holder Jeffery Mathebula (26-3-2, 14KO’s). There was talk of Donaire facing former champ Christian Mijares, but Donaire’s handlers opted for Mathebula.. On the undercard we will see former lightweight champ Brandon Rios step up to junior welterweight. Against yet to be determined opposition. I know of this Cuban fighter, oh wait didn’t Rios sign a No Cuban clause, like Marquez’ and his No orthodox style fighters clause.

What did you guys think of Mikkel Kessler over the weekend? Is he the truth at light heavyweight, or is he just another puffed up super middleweight looking for stardom outside his natural division. I’m all for a fighter going up in divisions when you have cleared the division out of all it’s respective champions. It makes sense when this happens seeing a fighter develop, and if your a fan you hope your fighter can make the transition at a higher weight. Then you have Mikkel Kessler who fought a sub par super middleweight at light heavyweight Alan Green. Green was put out of his misery by a looping left hook that almost decapitated him in the 4th round. Just because Kessler won convincingly does not mean he can hang with bigger and stiffer competition in the light heavyweight division.

It hurts me to believe, as much as it hurts me to say this… Roy Jones Jr (55-8, 40KO’s) will be fighting again, this time the former four time division champion will fight the WBC #4 ranked light heavyweight Dawid Kostecki (39-1, 25KO’s) in Poland on June 30th. Kostecki claims that Jones is his idol, and it is now time to beat his hero and take his place.. I think Tarver said and did that about some years ago, and yet we see Roy in the same predicament that we saw him in back then. Being cannon fodder for some no names. At least he’s gotten to tour the world while he gets knocked out.. Let’s see we’ve seen Australia, Russia, now we can see Poland while laying on our backs. He’s like Anthony Bourdain on the Travel Channel, except he does eat or visit landmarks. Instead he ends up were he always does with his back against the ropes, then staring at the ceiling from the canvas. Stop fighting Roy.. Please

Khan vs. Garcia and Williams vs. Canelo have been announced, thank you Golden Boy!

That’s it for today, I will get you some more news and gossip on the next Wire Report. It’s been a slow week, I didn’twant to bore you with anymore steroid talk, but I will soon, because I am sure as it gets closer to Pacquiao-Bradley.Steroids will be a hot topic again.. Remember that Thursday night we are live on blogtalkradio.com/ThaBoxingVoice from 7-9pm.. Check us out as we interview “Manny Pacquaio’s Foe” Timothy Bradley before their war on June 9th.Tune in and Join the Revolution. Thx You @number2snake