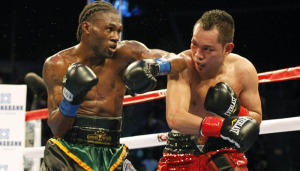 Many boxing fans were perhaps rightly more excited for the co-feature in the Barclay’s Center Saturday night than they were for the “Triple G” mismatch that followed, as the established Nonito Donaire (33-2, 21 KOs) went up against the hungry up-and-coming star, Nicholas Walters (24-0, 20 KOs).

Although this fight was looked upon as a 50/50 fight, there were still many who picked Donaire, feeling that Walter”s record was somewhat padded and because he had never gone a full twelve rounds, that he would be exposed by the experienced and durable Filipino.
On the flip-side however, there were of course question marks surrounding the 31-year old Donaire. How much did he really have left? He hadn’t looked the same since being badly defeated on points last April by the great Cuban Guillermo Rigondeaux. There were rumors that he had been getting beaten beaten up in sparring.
Round 1
The early stage of the round was fairly slow, until Donaire appeared to be down from what initially looked like a right hand but the referee Raul Caiz Jr. quickly and correctly called it a slip. Nonito ended the round well, landing a decent left hook but Walters took it well, passing the chin test. It was a good opening round to the fight. The Jamaican looked to be the much stronger of the two but Nonito landed the best shot to arguably do enough to win the round.
10-9 Donaire
Round 2
Perhaps pleased with his opener, Donaire looked more confident in the second round, standing within shooting range and landing some shots including a good one to the body of Walters and a couple of over-hand rights.  He looked the sharper of the two in this round but landed an accidental low-blow, drawing some boos from the crowd.  With 10 seconds left, Walters, knowing he was losing the round charged at Donaire and got him in the corner where he threw some wild shots with bad intentions but it was the “FilipinoFlash” who landed the cleanest shot of the fight so far, a right hand on the bell which sent Walters staggering back across the ring before being somewhat saved by the bell. He had however cut Donaire on the right eye. This was proving to be the great fight we had all hoped for.
10-9 Donaire
Round 3
The veteran continued where he left off previous, landing some good counters and at this stage his speed and accuracy were the difference. The crowd began to chant “Nonito, Nonito” but then Walters reminded us all of his power, landing a great uppercut that caused Donaire to touch down for the first time in his career, “The Axe Man” smelling blood went in for the finish but this time it was Donaire who was saved by the bell.
10-8 Walters
Round 4
Perhaps feeling the pace of all the power punches he had thrown, Walters surprisingly started this round a lot more cautiously. This gave Donaire a much needed chance to clear his head.  This was the first round of the fight where nothing really happened but one where Walters was definitely in control.
10-9 Walters
Round 5
Walters, now being a lot more calculated with his work was beginning to have a lot of success with his jab, and Nonito, who looked very sharp in the first two rounds was a lot more cagey, understandably more respectful of his opponents power. He did throw a brilliant looking combo at the end of the round, but it wasn’t enough to take it.
10-9 Walters
Round 6
The Jamaican stepped up his aggression in the sixth, forcing Donaire to fight on the back foot but without the success he had early on and Walters looked so much stronger when they did come together.  On the ten second warning they went to war and Donaire, with his back to the ropes, had success with his left hand but then coming forward swung wildly and missed, leaving himself widely open to a massive right hand which caused him to be knocked down face first.  He bravely tried to get up but it was all over.
Walters wins by TKO
The devastating finish surely marked the end of Donaire as an elite fighter but also introduced the world to a new one in Walters whose record improved to 25-0 with 21 knockouts.  In the post fight ring interview an excited Walters explained his knockout, “It’s like fishing, you give him the bait, and he (Donaire) came, you see he launches the shot, I get away from the shot and I counter him,” Walters explained.  Nonito apologized to his fans before being very complimentary of his opponent, “The size he had over me, I couldn’t move, he was amazing,” Donaire wouldn’t give a clear answer when questioned by HBO’s Max Kellerman if he would move back down in weight or retire, but he finished off the interview with a very honest and true statement. “He (Walters) beat the shit out of me.”
Tweet