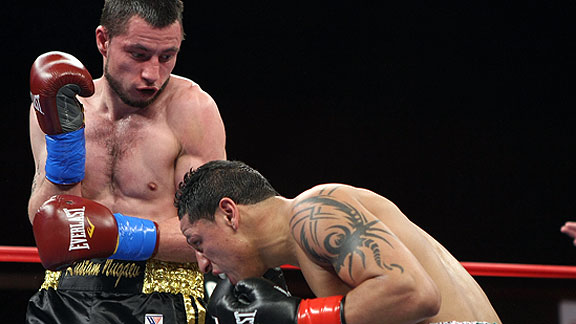 “If you move up to 135 you need to go through me, a real fighter,” said Nugaev. “Not Gamboa who will run the entire fight.  If you want a fight, then fight me…if you want to bore the fans on HBO, fight Gamboa.  Just like you, I’m a warrior with a lot of heart, who wants to put on a great show for the fans.  Let’s make it happen. ”

In 2013, Nugaev made big strides in his career, going undefeated in four bouts winning them all by knockout.  Promoter Gary Shaw believes his fighter is on the brink of greatness.

“Since returning to the U.S. from Russia in 2013, Nugaev has been unstoppable,” said Gary Shaw. “No one has been able to withstand his aggressive come forward style.  He’s the type of fighter everyone loves to see because he is all action.”

“A fight with Mikey Garcia, who I believe is one of the best pound for pound fighters in boxing, and Nugaev, would be sensational.  If Garcia moves up to 135, HBO should consider making this a main event.  This would be one hell of a fight for the fans.”