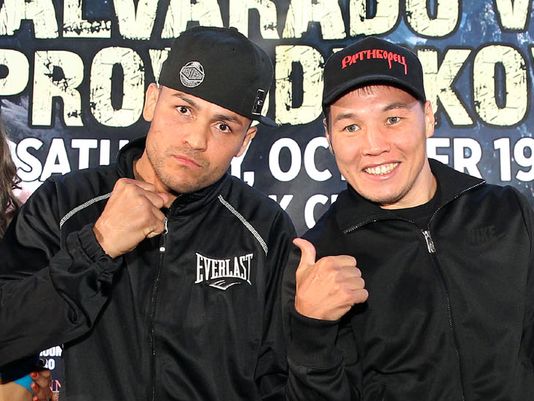 On April 28, 2007 Ruslan Provodnikov scored a 1st round stoppage over Antwon Barrett in his American debut.
The result maybe was just a blip on the radar that night because it was a four round bout on the undercard of a highly publicized Lightweight unification bout between Juan Diaz and Acelino Freitas.
Fast forward six and a half years, Provodnikov, Diaz and Freitas will be featured in different capacities when Provodnikov fights WBO Jr. Welterweight champion Mike Alvarado at the 1stBank Arena in Broomfield, Colorado.
The bout which is promoted by Top Rank and Banner Promotions will be televised live on HBO Championship Boxing.
In what most experts are calling a Fight of the Year candidate, Provodnkov (22-2, 15 KO’s) takes on Alvarado (34-1, 23 KO’s) in the highly anticipated bout.
Diaz (37-4, 19 KO’s) will continue his comeback when he takes on Juan Santiago (14-10-1, 8 KO’s) in a ten round bout.
Freitas will be in the corner of his nephew Vitor Jones De Olivera when the Jr. Lightweight participates in a four round bout against Martin Quezada.
“I am very blessed to be the main event on Saturday”, said Provodnikov.
“To be the main event is a big accomplishment.“
“Those types seem so long ago and the time has passed and now I am the main event and I am very glad things have gone the so well for me.
“Said Acelino Freitas, “I only remember Provodnikov as being a nice kid at the time.  The events of Saturday night proves that god’s destiny was for us to reunite this Saturday.”
Tweet